MoEF says no to radar installation in Narcondam hornbill habitat 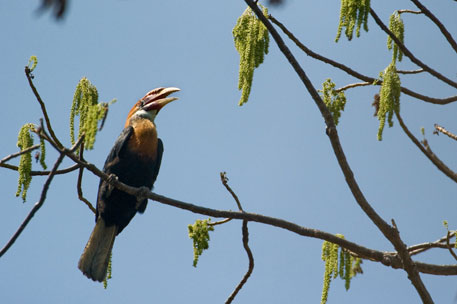 The Union environment ministry has turned down the Indian Coast Guard's proposal to install a surveillance radar in the Narcondam Island in the Andaman and Nicobar islands. The ministry said the defence project was a threat to the endangered Narcondam hornbill. The bird is highly endangered; only about 350 of them are left. Narcondam Island is the last remaining habitat for these birds.

The ministry received the proposal, seeking diversion of 0.637 ha of forestland for the project, last year. The Indian Coast Guard wanted to install the coastal surveillance radar and its power supply source within the Narcondam Island Sanctuary. It was part of the agency's plan to install a chain of static radar sensors all along the Indian coast for remote surveillance of activities in coastal sea. The proposal was recommended by the Andaman and Nicobar administration and the state wildlife department.

The ministry's standing committee for the National Board for Wildlife (NBWL) constituted a committee under its member Asad Rahmani to conduct a site inspection for the project. The report submitted by Rahmani said the project should not be allowed because of the unique status of the Narcondam habitat, which is the only abode of the highly endangered Narcondam hombill. Several members of the standing committee of the NBWL also objected to the project in its last meeting in June this year. The minister of state for environment and forests and the chairperson of the committee, Jayanthi Natarajan, however, kept the decision on the project pending.

Project could have wiped out the bird

In its order of August 31, the ministry said the project cannot be allowed because “disturbances and damage caused to the habitat due to cutting of road through the area, and because of the regular functioning of radar system, is likely to cause irreversible adverse impact on this unique bird, and can even wipe out the whole population of this bird, which is less than 350.”

It suggested that alternative sites should be identified for the radar by constituting a committee. “The ministry is of the view that the other options for the purpose, like installation of off-shore structures and several other viable options are available, which can spare the unique habitat of Narcondam lsland from disturbance. However, there is no such option available for the hornbill, whose survival may get seriously threatened if the establishment of proposed radar is allowed on the Narcondam Island,” the ministry said.