Mining would be barred in such pristine forests; 178 forest types graded on a scale of 0 to 100 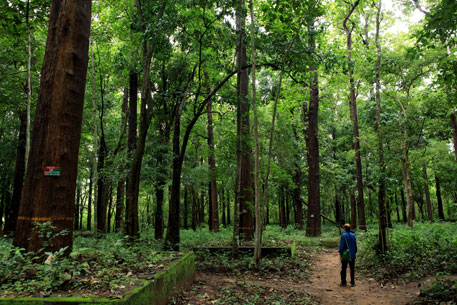 The Union Ministry of Environment and Forests (MoEF) has put out the report on parameters for identifying inviolate forest areas. These are supposed to be pristine forests where any mining activity would lead to “irreversible” damage and hence the need for their protection. The report made public on January 24 is open for public comments till February 23.

A Group of Ministers (GoM) constituted by the Cabinet secretariat had suggested in September 2011 that such inviolate forests be identified and that any non-forest activity in these be barred. The GoM was set up to look into issues relating to coal mining and other development projects. MoEF explained that the exercise first required formulation of parameters for identification of these pristine forests and other forests that need to be protected.

The ministry formed a committee under its secretary in March last year to formulate the parameters. The 16-member committee had representatives from the National Biodiversity Authority, Forest Survey of India, Wildlife Institute of India, National Tiger Conservation Authority, principal chief conservators of forests from some states and ministry officials.

The committee has indicated six measurable parameters for identification of inviolate areas – forest type, biological richness, wildlife value, forest cover, landscape integrity and hydrological value. All parameters will be scored on a 0-100 scale. The committee has scored 178 forest types based on comparative ecological significance, extent and range and uniqueness among other things.

To illustrate, Andamans' moist deciduous forest, Cachar tropical evergreen forest, moist bamboo brakes, among others, score more than a 90, while Siwalik chir pine forest, Assam sub-tropical pine forest, Rann saline thorn forest and the likes score less than 20. Scoring for forest cover has been suggested to include gross forest cover and weighted forest cover average with respect to the total forest area, multiplied by 100. Forests with area less than 50 sq km across the country will be scored at 100.

The committee has recognised that biodiversity conservation is the backbone of inviolate area protection and suggested the use of biodiversity characterization carried out by the Indian Institute of Remote Sensing (IIRS) for the country. This IIRS characterisation considers factors like uniqueness, species richness, biodiversity value, terrain complexity and disturbance. Scoring criteria have also been developed for wildlife value of a site. For instance, exclusive breeding sites and habitats of rare/endangered species will get a score of 95 even if they are not wildlife sanctuaries or national parks. On the other hand, areas with occasional presence of wildlife are to be scored 25 similarly; wildlife sanctuaries and national parks will get a score of 100.

Landscape is to be scored based on satellite imagery and maps. For example, an area located at or near the centre of a non-fragmented landscape having more than 1,000 sq km of area will be awarded a score of 100. The committee has taken into consideration the importance of forests in maintaining hydrological cycle. Any area located in the catchment of water supply schemes is to be scored 75 while area not being in any catchment of a perennial or major seasonal river/stream is to be scored 40. Forests located in direct catchment or 250 m from wetland boundary (area > 10 ha) will be scored a 100.

For the exercise, the committee has suggested dividing the country into 1km x 1km grids and that each cell then be scored on these parameters. These scores are then to be averaged out for each grid. Based on a "threshold" average score, each grid can then be assigned the attribute of "inviolate" as necessary. Grids with a score of more than 70 on 100 are to be labelled as inviolate. For a mining block, if most of the grids falling under it are inviolate then the block is to be considered inviolate as well.

It is now proposed that another committee be formed under the chairmanship of director general of the forest survey of India to identify areas as per these parameters and rules and submit the same to MoEF. The ministry will then put out this list in the public domain for comments from different stakeholders including the state governments. The MoEF will then finalise the list and notify these under the Environment (Protection) Act of 1986.