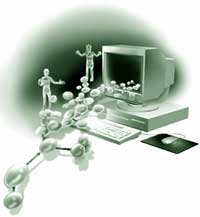 a team of researchers at the Queen's University in Belfast, Ireland, is training human-made molecules to act as tiny computers. These specially-synthesised molecules that can act as nanoscale light sensors or molecular transistors (analogous to 2-way switches) can revolutionise medicine, industry and information technology.

Sri Lanka-born organic chemist Amilra de Silva and his team have created molecules that give a unique response to each permutation of two variables to which they are exposed. These variables are elements (sodium or potassium) and light (blue, green, red or ultraviolet). Since the synthesised molecules are fluorescent, their response to which combination of element and light (colour) they are exposed to, shows up as a flash of light of a particular colour.

This property of these molecules is analogous to semi-conductor switches that make up a computer. These switches are called logic gates in computer parlance and are of seven types such as and, or and not. The significance of the work by the Queen University scientists lies in the fact that they could design logic gates that have chemicals and light as inputs and light as output. The output from one molecule can serve as the input for the next and so on -- just like in a computer.

These nanoprocessors (about a thousand times smaller than a microprocessor chip used in a conventional computer), the scientists say, can gather, process and supply valuable data on how chemical and biological actions take place at a minute level. The group's findings were announced at the British Association for the Advancement of Science's week-long festival at Dublin, which ended September 10, 2005.

"This is a path-breaking work," says Murali Sastry, a nano-materials scientist at the Pune-based National Chemical Laboratory. According to him, it is anticipated that by the year 2020 integrated chips used in computers will be of molecular dimensions, going by the current trend of miniaturisation. But designing and assembling molecular switches that work in tandem with such small-scale chips is going to be a major roadblock that the electronic industry is going to face. The feat by the Queen's University team can be considered one of the first successes in addressing this complex challenge.

In fact, the underlying principle of the study is similar to photosynthesis, the process whereby plants use sunlight to produce food for themselves as well as for us. Called photo-induced electron transfer, the process facilitates movement of electrons when light falls on them. More importantly, the speed of this process can be controlled by chemical means.

"Computing isn't just confined to semiconductors. Molecules have been processing information ever since life has been around on our planet. Harnessing this remarkable ability really does have the potential to make a big difference to people's lives," de Silva said in a statement.

Apart from the electronics industry, the work by de Silva's team has potential diagnostic and industrial applications. For instance, such molecules can be tagged to, say, an anti-tumour drug so as to ensure that the medicine targets only the cancerous cells. Similarly, nanoscale fluorescent sensors can be developed for applications in chemical and other industries.

Another interesting aspect of the molecules synthesised by the scientists is that these tiny sensors are modular. This makes them highly flexible and expandable to meet various demands. In other words, tens of hundreds of such sensors can be put together, say, to examine a large area of operation. Besides, they can be integrated into inorganic compounds slightly bigger (than they are) in size or can be embedded in organic polymer films to produce robust systems compatible with harsh industrial environments.

Recently, the Belfast scientists collaborated with a Japanese firm to engineer a tiny, molecular transistor of just 3 nanonmetre size that emits light when supplied with the right chemicals. An application of an earlier breakthrough in fluorescent sensor technology by the scientists is the blood gas analyser, which is widely used in intensive care units and ambulances to monitor blood oxygen levels of critically ill patients.