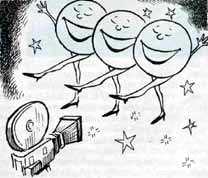 WATCHING the Hollywood movie, Honey I Shrunk the Kids, one couldn't help marvelling at the special effects that made the smaller-than-ants kids look so real. But imagine watching a film with characters infinitely smaller than those miniaturised kids. And without any special effects. Recently, 2 research groups in the US have for the first time captured in 3-D, molecules in action using unusual cameras -- X-rays (Science, Vol 266, No 5184).

The films consist of only a few frames showing the iron-containing protein myoglobin -- a common muscle protein -- engaged in its vital task of storing and releasing oxygen molecules. While the 2 groups -- one at the Los Alamos National Laboratory and the other at the University of Chicago -- are not the first to make X-ray movies of molecules, they are the first to shoot molecular events that normally take place in a few nanoseconds (million-billionth of a second).

The concept for molecular movies arose from X-ray crystallography, a technique for producing 3-D images of a molecule by passing a beam of X-rays through a crystal containing countless copies of it. By recording and analysing the scattered X-rays, researchers can pinpoint the locations of the molecule's hundreds or thousands of atoms. In X-ray movie making, however, the goal is not a still life but a series of frames showing the molecule in action as it responds to a chemical trigger or a flash of light. If you could look at these biological molecules actually doing their stuff, you'd get a better idea of how they work, says one scientist.

To shoot these frames, crystallographers have to slow down the reactions they want to study. One effective way is to freeze them, literally, so that the protein's or enzyme's motions are broken into "molecular structures are designed to be stable and to resemble in some way authentic intermediates" which then can be framed using X-rays.

But there is a problem. Chemically arresting the reaction might affect its authenticity. Very low temperatures can slow a fast reaction by a factor of 10 billion, stretching to hundreds of seconds of binding and release processes which normally take less than a microsecond. By having to slow down the reaction, you may be disturbing the reaction. You don't know; you hope not, but you've always got to worry about it.