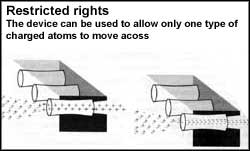 Making gears, switches and even motors of nanometre (1 billionth of a metre) sizes is getting common. These nano- machines have potential applications in a host of areas ranging from designing better microchips to futuristic dredges which could clear up clogged arteries!

Recently, Charles Martin, Vjnod Menon and Mathushiko Nishizawa at the Colorado State University have made a molecular sieve with nanometre-sized pores. The artificial membrane has the ability to be tuned to allow ions (charged atoms or molecules) of a particular charge to pass through (Science, Vol 268, No 5211).

With the sizes of the pores being in the same ballpark as molecular sizes, the switchable membrane could have an immense impact on the chemical industry. By designing the pore size and charge to allow only molecules of the required charge and size to pass through, separation processes could be greatly simplified. Many multistep processes could be done away with and replaced by the switchable ionic membrane.

Martin and his co-workers started with commercially available filtration membranes (usually thin plastic pieces with very small pores) to make an array of nanoelectrodes first. This was done by plating gold over the entire membrane thereby covering both sides and the pores. Now, the gold on one of the sides was removed lea" millions of gold disks on the face. EA of these disks could function as electrode of narsometre size. These electrodes could be used to detects extremely small quantities of chemc in a solution.

By modifying the method to create these nanoelectrodes the researchers realised that they could create a molecullar sieve. Using a much thinner coating of gold on the plastic membrane and experipbng with the conditions of the gold plating process, they created gold tubes bead of wires. These tubes could be instead of varying widths ranging from about 1.5-20 nanometres.

This by itself would be highly useful, But what makes the membrane interesting Is that now one could switch the selectivity. Since the tubes are made of gold and are hence conducting, one could place electric charge on them. Putting a positive charge would inhibit the motion of positive ions because these will be repelled from the membrane while a negative charge would reverse the effect thus allowing a reversible is loeve which could be switched easily. it was a tremendous improvement over available membranes which would only ne kind (either positive or negative) to pass and could only be switched sconplicated chemical process.

Apart from its obvious industrial application the ionic membrane also serves as a useful model to study ion transport through the skin. Many biological systems lillimembraties which filter ions according to their size and charge. The switchable membrane could be a useful experimental model to test various hypotheses.