Monarch numbers rose to 56. 5 million this year from a record low of 34 million last year 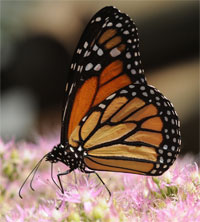 The number of Monarch butterflies wintering in Mexico has risen this year compared to last year, but it would not be enough to reduce the threat of extinction that the species faces, media agencies reported on Tuesday.

There are two subspecies of Monarch butterflies found in North America. Those found east of the Rocky Mountains migrateeach year from Canada to Mexico in the autumn to spend the winter in the country’s mountainous pine and fir forests which are their ancestral breeding grounds. Those found west of the mountains migrate to California but have also been found in Mexico.

On Tuesday, Mexican environmental authorities and scientists released the findings of a formal census according to which, the number of Monarchs wintering in Mexico rose to 56. 5 million this year from a record low of 34 million last year.

However, scientists warned that the number might not be enough to lessen the specter of extinction hanging over the species.

A Reuters report quoted SarinaJepsen, endangered species director for the Xerces Society for Invertebrate Conservation, as saying that the latest population estimate was the second-lowest since surveys began in 1993 and that the butterflies faced the possibility of extinction without habitat and other protections that would come with adding the insects to the U.S. federal endangered and threatened species list.

"We're happy to see numbers higher this year than last winter. But we're still seeing a decline of more than 90 percent compared to the 1 billion monarchs that migrated to Mexico in the mid-1990s," she said.

The report also noted that butterfly numbers were mainly declining because of destruction of milkweed plants on which they depend to lay their eggs and nourish hatching larvae. The plants in turn are declining because of increased cultivation of crops genetically engineered to withstand herbicides that kill native vegetation like milkweed.