Money is never 'for nothing' 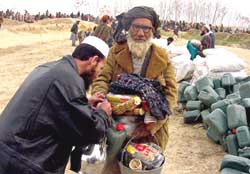 Another serious administrative crisis has come to the fore in Afghanistan with the resignation of the country's planning minister Ramazan Bashardoost on December 13, 2004, after the government refused to wrap up 2,000 national and international aid agencies working in the country. A week ago, Bashardoost had declared that 80 per cent of these agencies were inefficient and corrupt and demanded their closure. More than 3,000 international and 1,500 national non-governmental organisations (ngo) are registered with Afghanistan's ministry of planning (mop).

The Agency Coordinating Body for Afghan Relief (acbar), a grouping of over 90 aid agencies, disagrees with Bashardoost's view. "The [humanitarian] work will be interfered with, which will result in the poor suffering. There will be chaos if there is liquidation of ngos," Mohammad Hashim Mayar, a programme coordinator with acbar, reportedly said. However, Mayar admitted that many aid agencies were not fit to be be classified as ngos: "There are many organisations doing good work, but they are not ngos. They should be registered as private companies."

But Bashardoost's opposition of the ngos is not unique. In September 2004, a World Bank report Afghanistan: State Building, Sustaining Growth, and Reducing Poverty had called for donors to provide direct aid to Afghanistan government. It said the government's efforts were "not receiving enough direct support from the massive amount of donor aid" being provided outside the government budget. It even said the government's leadership was undermined by the "second civil service" comprising employees of the ngos.

The need for regulation and registration, to help distinguish the real non-profit groups from those trying to merely encash the situation, has been voiced often. "Serious ngos have been calling for an updated ngo law and regulation for years," Paul Barker, country director of care International, was quoted by irin as saying. mop officials say a draft legislation has already been prepared. It now has to be reviewed by the president and the ngos.