Money, money everywhere; not a clean drop to drink 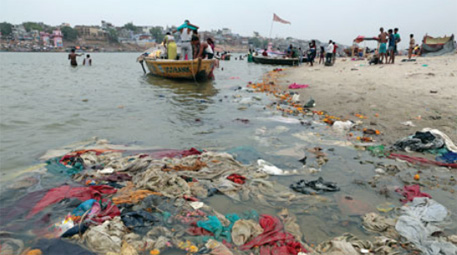 Narendra Modi government’s first full-year budget, presented on February 28, has allocated Rs 4,173 crore for water resources and Namami Gange, an integrated Ganga conservation mission. The budget also proposes tax benefits for contributors to Clean Ganga projects, declaring a 100 per cent tax exemption. But the announcements do not hold much promise for the Ganga as the budget gives very little emphasis to cleaning of the river.

In the interim budget last year, the NDA government had named the Swachh Bharat and Clean Ganga programmes as their topmost priorities for ensuring cleanliness across the country. Finance Minister Arun Jaitley had even criticised useless investment of huge amount of money by the previous government for cleaning the Ganga. Accordingly, the last budget had proposed Namami Gange and set aside a sum of Rs 2,037 crore for the purpose. In addition, a sum of Rs 100 crore had been allocated for development of ghats and beautification of river fronts at Kedarnath, Haridwar, Kanpur, Varanasi, Allahabad, Patna and Delhi.

But till date, very little has been done on the ground. A major amount of money has been siphoned off to conduct meetings and discussions. According to sources, a reply to an RTI filed to request details about expenditure on Ganga cleaning showed that around Rs 44 lakh had been spent only on meetings till November 2014.

Some initiatives for the beautification of ghats have, however, been taken up by the Modi government in Varanasi. But the Ganga remains unhealthy, misfit even for bathing, and no efforts have been made to stop the discharge of pollutants.

U K Choudhary, a noted environmentalist, says that investment should have been directed to decreasing the pollution load of the river. “The present budget seems to be very vague on Ganga cleaning. There was no mention of any technically sound plans to revive the river,” he says. A 2013 publication of Central Pollution Control Board (CPCB) shows that when the river reaches the plains, water withdrawal peaks for irrigation and drinking water. In the stretch of the river from Rishikesh to Allahabad, there is almost no water during winter and summer months. In other words, the river stops flowing. Choudhary says there should have been allocations for planned scientific studies to maintain the ecological flow of the river.

Rajendra Singh, chairman of Rajasthan-based non-profit Tarun Bharat Sangh, thinks there should have been a separate budget for rejuvenation of small rivers in the Ganga basin. This would have helped bring the flow back into the main river in the basin. Singh is known for rejuvenating Arvari river in Alwar district of Rajasthan. “There should have been allocation for projects to separate storm water drains and drains which carry sewage water. This will help in improving the quality of the Ganga. Currently, municipalities dump raw sewage into storm water drains which flows into the river and pollutes it,” he says. The CPCB report of 2013 shows that 6,087 million litres per day (MLD) of wastewater are discharged into the Ganga. Singh thinks the budget would have been promising if it had focused on the revival of ponds and waterbodies in the Ganga basin to recharge the river.

B D Tripathy, noted environmentalist and professor at Benaras Hindu University, says that before Prime Minister Narendra Modi’s government, no other Central government had placed as much emphasis on reviving the river. While he had expected the government to allocate a huge amount of money for cleaning the Ganga, he adds that only investing money is not enough. A proper direction and holistic plans must be put in place for concrete results. “I don’t understand why the budget did not prioritise ecological flow of the river. There is no dearth of money for the river cleaning programme. But this budget will make no difference as the existing revival plans are flawed,” he says.

A K Gosain is professor at Indian Institute of Technology, Delhi, and works on revival of the Yamuna, the largest tributary of the Ganga. He had expected good investment for other rivers apart from the Ganga. “There should have been allocation for scientific studies by research groups so that a proper information baseline can be developed to understand the level of deterioration of rivers like the Ganga and the Yamuna. I had expected that money would be allocated for integrated water resources management, including both surface and groundwater. The present budget does talk about scientific research and a network of innovation hubs, with Rs 150 crore earmarked for the purpose. But whether any of this allocation will be spent on researching the Ganga is yet to be known,” he says.

Ravi Chopra, director at Dehradun-based non-profit Peoples' Science Institute, is of the opinion that maintaining ecological flow in the Ganga is very important. “Ecological flow can be brought back if farmers reduce the extraction of water from the river for irrigation or if less water intensive crops are cultivated. I had thought the budget would provide for paying these farmers for ecological services and would encourage farming of crops which require less amount of water for irrigation,” he says. He had wanted the government to encourage Private-Public Partnership (PPP) for new sewage treatment plants and payment to private parties to be conditional on the quality of treated water coming from these plants. But the current budget talks only about broad initiatives. Such initiatives will not give rise to clear-cut results until strong goals and proper planning are adopted.

Together, experts think that fund allocations alone cannot save the river. Programmes must be guided by a proper direction. The UPA government had made funds available and even secured a loan of Rs 4,600 crore from the World Bank for cleaning the Ganga. But it did not show any results as the approach was not correct. Experts agree that building of sewage treatment plants will have no effect in our unsewered or poorly sewered cities.