Pollutants discharged from Russian smelters, worth millions of dollars, can be profitably extracted 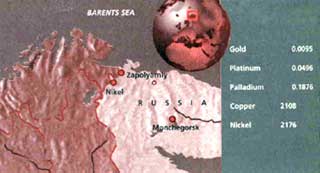 A TEAM of scientists from Norway, Finland and Russia are studying one of the most polluted areas in the world, the Kola peninsula in Russia. The pollutants emitted out into the atmosphere from the smokestacks of Russian smelters get deposited on the region's soil here. The level of these pollutants has been estimated to be so high that every sample of water obtained from streams near the plant exceeded the safe limits for drinking. Even the moss thriving in an area of 400 sq km around the smelters was contaminated with around 100-300 ppm (parts per million) of nickel, while the average concentration of nickel in British moss is 2.2 ppm. Sihce these pollutants are hazardous to the environment, a clean-up programme is a must. The best part is, the value of these pollutants is estimated at US $50 million, once they are cleared and extracted from the soil.

According to the Russian government, Monchegorsk, amickel and copper processing plant emits 1,619 tonnes (t) of nickel, 934 t of copper and 97,715 t of sulphur dioxide annually into the atmosphere. The plant discharges several hundred kilograms of platinum, palladium and gold as well. The area around this plant was found to contain 2,100 ppm of nickel and copper in the topsoil, 1. 76 ppm of palladium and nearly 0. 1 ppm of gold. The survey's senior geochemist and Norwegian leader of the project, Clements Reimann, said that the4metal content of even snow and rainwater samples 10 km from Monchegorsk revealed that this area was being showered with more than us $10,000 worth of valuable metals per sq km eveKy year. It has been defined as a 'technogenic desert' by Russian scientists, @@ere technological developments have led to desertification of the area. This area expanded from 415 sq km to 760 sq km between 1973 and 1988.

Ron Boyd, from the Geological Survey of Norway, pointed out that the concentration of the metals found near Monchegorsk matched those in the ore from the Talnakh mine in Norilsk. This suggested that metals were emitted at an early stage in the processing of the ore, probably in the form of ore particles discharged from smelters.

Official estimates for all three plants - Monchegorsk, Nikel and Zapolyarnity - suggested that each year they emitted nickel worth us $15.9 million, cobalt worth us $5.9 million and copper worth us $2.8 million. When gold, platinum and palladium figures were added, the probable annual value of all emissions came to more than US $50 million.

Naturally, this points to a possibility of enormous profits in investing in the clean-up programme of these rich pollutants, which are proving hazardous to the eco-system. Reimann says, "I would like to think of a big vaccum cleaner which would suck up the metals from soil." And that is not a crazy idea at all.