Accord on global management of biotech foodstuffs 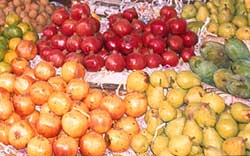 all foods produced through the use of biotechnology should be subjected to safety assessments before they are sold. An agreement to this effect was signed recently in Yokohama, Japan, among 226 participants of the United Nations' Codex inter-governmental task force on foods derived from biotechnology. It was also decided that nations should be allowed to use detecting systems as part of their risk management procedures.

The body's draft principles on the risk analysis and management of biotech products are sure signs of progress in the global management of genetically modified (gm) foods. They seem to have vindicated, to some extent, the European Union's stand on setting up a tracing mechanism for gm foods.

The task force will continue to develop guidelines for risk assessment of gm foods originating from micro-organisms till March 2003. It has been hosted by Japan since the year 2000. Its final work will be submitted for adoption to the standard-setting Codex Alimentarius Commission at its next meeting in July 2003 in Rome, Italy.

As per the agreement, the draft principles require all biotech foods to be assessed for safety on an individual basis, with "both intended and unintended effects" being taken into account. They state that "new or altered hazards", as well as changes in key nutrients "relevant to human health", should be identified.

In genetically engineered foods, genes from bacteria, viruses, other plants or animals are inserted into crops such as corn, canola, soyabeans, potatoes, tomatoes, squash, and papayas to achieve favourable characteristics including higher yield, faster ripening, pest control and herbicide tolerance.

Grey areas still exist in the field of genetically modified foods, particularly for people who have food allergies, because they are neither subjected tests nor regulated. Further, there is no stipulation that they be labelled in most nations. It was also decided that countries should be given the choice to carry out post-market monitoring. Such a watch may necessitate a gm food tracing system, which would also allow products to be withdrawn if negative effects on human health are identified, the task force agreed.