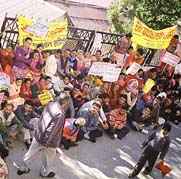 ON December 23, 2006, more than 200 people gathered in Shimla, Himachal Pradesh, to protest the government's inaction regarding crop depredation by wildlife, especially monkeys, in the state. Simultaneously, 48 such meetings were held in the state, in which about 9,000 farmers participated. The Himachal Gyan Vigyan Samiti (hgvs), a Shimla-based organisation, which has been working on the issue for the past year, was instrumental in organising the protest. Though the government acknowledges the problem and earlier, in March 2006, the state assembly too had discussed the issue, no concrete steps have been taken.
The government says monkeys in the state increased from 60,000 in 1964 to 317,000 in 2004. Export of monkeys for research was banned in 1978 and their number has shot up since. In 2004, 3,000 monkeys were relocated from Shimla, the Kalka-Shimla highway and Rampur.Reportedly, they were released in nearby areas and farmers believe the monkeys that raid their villages come from this batch of animals. "In a city they can shut the doors. How does one lock a field?" asks O P Bhuraita, state convenor of the environment sub-committee of hgvs.

A committee chaired by S M Mohnot, chairperson, Primate Research Centre, Jodhpur, looked into the matter. "This population is definitely explosive for a small state like Himachal...The observations and fears on monkey menace are thus natural and not exaggerated," says its December 2005 report, which was ignored.

In all this talk of monkeys, other animals like wild boars, porcupines, rabbits, sambhars, blue bulls, peafowls and jungle fowls, which also damage crops, tend to go unnoticed.
Of the state's 3,243 panchayats, 2,301 have been affected by crop depredation. hgvs estimates a total loss of about Rs 325-375 crore per annum. "In Himachal, 85 per cent of the land holdings are small or marginal, resources are limited and dependency on land is very high. About 70 per cent of the population is dependent on agriculture," says Sanjay Chauhan, president of Himachal Kisan Sabha, a farmers' body.

Dhari village is a case in point. Though well connected by road to Shimla, and blessed with ample water and fertile land, some 95 per cent of the villagers have abandoned their fields. The ones remaining get only about 40 per cent of the yield they used to get. Kuldip Singh Tanwar, a former forest official and president of hgvs explains, "most of the farms are close to nullahs which are far from the villages and difficult to guard." The nullahs, sources for water, also attract the animals.
Culling of monkeys is the obvious solution. "(But) it is not practical to expect the forest department to cull the simian population on its own. For over two months we have requested the farmers to come forward and identify pockets for a pilot project but they are yet to react," says Vinay Tandon, chief wildlife warden and additional principal conservator of forests (wildlife) of the state.

Bhuraita calls this a stopgap arrangement. "We have neither the expertise nor the means to do this," he says. A cartridge costs up to Rs 250 and very few farmers possess guns. Also, the permission of the divisional forest officer was needed before culling. To make culling simpler, the Wildlife (Protection) Act, 1972, needs to be amended, says hgvs. "There is a law for the 'protection' of wildlife. We need one for its management," says Bhuraita.

Sterilisation, another option, is a long-term solution but expensive.Though the government has a sterilisation plan, experts believe any change in population will be evident only after 7-8 years. "Feeding of animals has to be stopped and garbage dumps better managed," believes Tandon.

With assembly elections impending, the issue is gaining political momentum. "Let them come for votes, we will not support politicians till our livelihood is secure," says Sunita Devi from Pujarli panchayat .