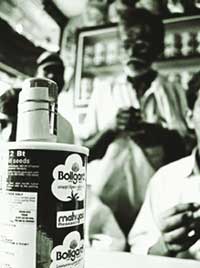 The ap government has blamed Monsanto for charging "abnormally high prices" from farmers for Bt cotton seeds on which it has global monopoly. Leading seed traders Mahyco (licensed by Monsanto to produce Bt cotton in India), Pro-Agro, Raasi and Nuzvid are mentioned as respondents in the petition filed by the ap government.

The petition says that Monsanto was paying a procurement price of just Rs 200 to Rs 250 for 750 gm of Bt cotton seed to seed-growers, but it sold the same to cotton-growers at Rs 1,850 per packet for 450 gm. Of this, Monsanto holds back Rs 1,250 per packet towards 'trait value' added to the seeds.

Monsanto controls about 25 per cent of the ap's total cotton seed market. In India, it has sold about Rs 130 crore worth seeds since 2002 and of this about Rs 78 crore had been held back by the company towards its 'trait value'.

N Raghuveera Reddy, agriculture minister, ap, told Down To Earth, "We are fighting for the farmers' interest and states like Madhya Pradesh and Punjab might soon join the fight." Agriculture commissioner Poonam Malakondaiah clarified that the ap government was not against the Monsanto technology as it was certified by the Genetic Engineering Approval Committee (geac). But the company had no patent rights in India over Bt cotton, she added.

The ap government had banned Monsanto's Bt cotton seed following crop failure in the state and news of a data scam in the Warangal district. Mahyco was asked to pay a compensation of Rs 3 crore to farmers who lost their crop. But the company challenged the ban in the ap High Court. At this stage, chief minister Rajasekhara Reddy decided to appeal to the mrtpc .

However, executive director G V Ramanjaneyulu, Centre for Sustainable Agriculture, a Hyderabad-based ngo, said , "The issue of Bt cotton seed's patent rights needs to be discussed. Instead of demanding a price slash, the government should stall the technology itself and encourage non-pesticidal farm management practices."

Recently, the ap government threatened to cancel the Mahyco-Monsanto Biotech licence if the company did not compensate the loss incurred by farmers on account of Bt cotton failure. The agreement obliges the company to compensate the growers for crop failure.