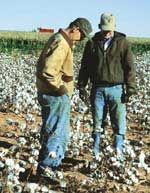 A group of Texan cotton farmers has sued Monsanto and two affiliated companies for massive crop losses. The farmers claimed the companies failed to warn them of a defect in their genetically altered cotton seed. The lawsuit seeks an injunction against a "longstanding campaign of deception.

The two affiliated companies named in the lawsuit are Delta & Pine Land and Bayer CropScience LP, producers and retailers of Monsanto's biotech cotton.

Filed by about 90 farmers, the suit claimed that Monsanto's "Roundup Ready" cotton failed to withstand Monsanto's Roundup weed killer as it had been genetically altered to do. They claim Monsanto was aware of this but didn't make the information public so that farmers would continue to buy and use their weed killer.

Monsanto has denied the allegations and is trying to reach an out-of-court settlement with the farmers.