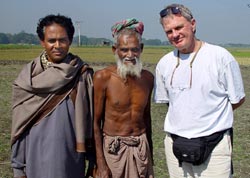 a new method that used the Bangladesh monsoon to make a monsoon prediction model could end the woes of millions of farmers. The method was used for the first time to produce forecasts of 20-25 days for the Ganges valley of Bangladesh during the summer of 2002. Unlike the predictions of most other models, its forecasts closely mirrored actual precipitation levels.

The method has been developed by researchers from us-based Georgia Institute of Technology. "Forecasting weather just a few days in advance is not particularly useful. What is needed is a 20-to-25-day forecast to take all possible precautionary measures. We were able to do this. The method also predicted the month-long break in monsoon rains that lasted from the end of June to early July last year. But unfortunately the forecast could not prevent the loss of us $6 billion," says Peter Webster, the mastermind behind the development. He claims it would help farmers make informed decisions, especially pertaining to the management of water resources.

It can be used in any region. It can be adjusted for precipitation changes related to temporary climatic events such as El Nio and La Nia. It is essentially statistical, but depends on a detailed knowledge of the dynamics of the atmosphere and the ocean, including changes induced by global warming.

Webster is now intent on making this type of forecast available to government officials in Bangladesh and, later, in other places where rainfall varies drastically within a season. He has received official recognition to form an organisation called Climate Forecasting Applications in Bangladesh.