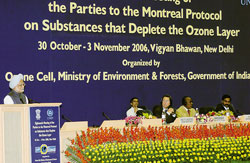 the 18th Meeting of the Parties (mop) to the Montreal Protocol on substances that deplete the ozone layer took place in New Delhi, from October 30 to November 3, 2006. Over 550 people participated, representing governments, un agencies, etc.

This year's mop had opened with one of the heaviest agenda in years, with issues ranging from controlled use of methyl bromide, the difficulties faced by developing countries (Article 5 parties) in transiting to chlorofluorocarbon (cfc)-free inhalers (cfc is used to propel medication out of canisters), cases of non-compliance, and future challenges.

A disturbing background was provided by reports of the largest ever hole in the ozone layer, observed this autumn, indicating that predictions for its restoration are off by 10 to 15 years.

In the light of the 2010 phase-out of many ozone-depleting substances in Article 5 parties, discussions gravitated towards the feasibility of this deadline, especially related to cfc-free inhalers. For some developing countries, the difficulty of accessing technologies needed to produce cfc-free inhalers is a major concern, since failure to adopt alternative technologies means risking non-compliance. Lack of technology transfer was an often-heard complaint. While a multilateral fund exists to assist Article 5 parties in the conversion process, this did not appear to allay many fears.

Developed countries, however, seemed to cling to methyl bromide, another substance to be phased out. The example they were setting for developing countries, which are working towards a phase-out, was questioned.

Some participants also questioned the viability of hydrochlorofluorocarbon (hcfc) controls without multilateral fund assistance. The steep increase in hcfc production and consumption in countries like China and India sharply contrasts with the 2016 deadline for freezing hcfc use in Article 5 countries. Noting lessons from the protocol, prime minister Manmohan Singh called for additional financial and technological resources to Article 5 parties.