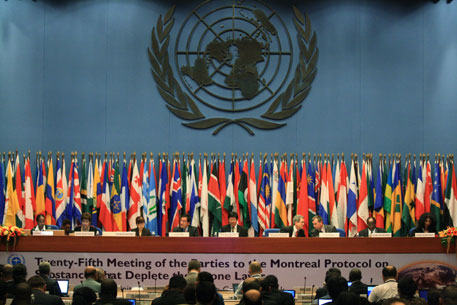 On the opening day of the Montreal Protocol when co-chair Patrick McIrney from Australia introduced the agenda and asked for its adoption, there was silence in the room for  a minute. It was almost as if he spoke a second too soon before the Indian delegates sought to intervene. India wanted the agenda item for discussing hydrofluorocarbons (HFCs) under the Montreal Protocol deleted.

The Indian head of delegation, A Duraisamy, said: “The Montreal Protocol is a specific treaty for phasing out production and consumption of ozone-depleting substances. The proposed amendment to discuss HFCs, which is not an ozone-depleting substance, has been discussed 'n' number of times and parties have not been able to reach an agreement. Clearly, the amendment does not belong under this forum.” He then  asked for the removal of agenda item 10, under which the amendments for discussing HFCs under the Protocol were to be deliberated. While many were familiar with the stance that India had repeatedly taken at Montreal Protocol meetings, the tension in the room was still palpable.

What followed was a volley of exchange between those who supported and those who opposed India’s opposition to the amendments. Kuwait and Saudi Arabia, known to block negotiations under other environmental negotiating forums, took India’s side. The US, Canada, Mexico and Micronesia, countries that had put forward proposals on amendments to the Protocol, registered reservations to India’s opposition, asking that the agenda item be retained. The US and Canada expressed shock at Duraisamy’s words.

India was expected to soften stand

Many had come to the Montreal Protocol meeting expecting some movement on the issue of HFCs. In the run up to the meeting, heads of all countries under the G20 had issued a joint communiqué on addressing HFCs under the Montreal Protocol, which included the US, China and India. Following this a bilateral meeting took place between the Indian premier and American president where this issue came up for discussion. President Barack Obama and Prime Minister Manmohan Singh decided to convene an India-US task force on HFCs. Following all this high-level attention, many had expected matters to have changed on the Indian front. But Duraiswamy pointed to precisely the lack of movement on the India-US bilateral discussions, stating that unless progress could be made on the bilateral discussion, India’s position at the multilateral forum of the Montreal Protocol would remain unchanged. In response, the delegate from the US stated that bilateral and multilateral discussions should not be confused.

Later in the day, issues such as funding for climate-friendly alternatives were discussed. Switzerland’s proposal for voluntary contributions from parties to address additional funding for moving away from hydrochlorofluorocarbons (HCFCs) came up for discussion. While China welcomed such contributions along with Norway, it also said that funding resources needed to be managed in an integrated manner. Other developing countries that were opposed to such contributions stated that the multilateral fund (MLF) was successful in phasing out other substances in the past, and so voluntary contributions that parties wished to make should be discussed under the fund itself.