South Africa to drain oil out of beached Italian ship 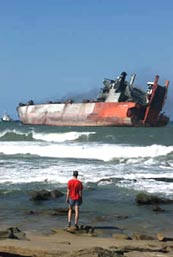 after several failed attempts to put into water burning Italian ship Jolly Rubino that had run aground, South African authorities have now decided to pump oil out of its fuel tanks. The vessel wrecked recently near the country's northeast coasts. The crew abandoned the ship after it caught fire, 46 kilometres off the coast. The vessel then drifted towards the shore, less than 182 metres from the St Lucia Wetlands Park, a key breeding ground and wildlife sanctuary. "At the moment, it looks like we will win. And if it does not happen that way, we will do all that we can to minimise the damage," said South Africa's deputy environment minister, Rejoice Mabudafhasi.

The recent plan comes after several failed attempts to prevent the oil from seeping into the wetland. Authorities had tried to lay oil-absorbent booms (large floating barriers) and had also used sand barricades to contain the oil.

The vessel's cargo included various toxic chemicals, among them alpha-naphthylamine which is particularly harmful to the environment. The St Lucia Wetland Park is recognised as an internationally important wildlife site by the un and is also listed in the Ramsar wetlands conservation agreement. The park's marine conservation area is a nesting site for endangered leatherback turtles, while reefs off the coastline are popular among scuba divers for their wide variety of fish. "Estuaries are the most dynamic of all ecosystems, and the introduction of oil would have a very adverse effect. Workers will have to prevent oil from getting into the protected area at all costs, or face possible disaster," said Richard Penn-Sawers, conservation manager at the park. Conservationists say that this oil spill should be a signal to the world's shipping companies to improve maintenance standards.