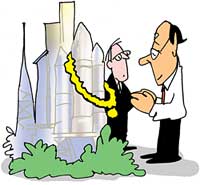 If scientists are part of a global community, does that mean there is a uniform pattern in the choices they make? The answer can be both yes and no, going by the results of a recent survey of Indian scientists. Unlike most of their fraternity in the us and Europe, an overwhelming 56 per cent scientists in the country prefer a mixed economy; this is consistent with their support for both government and private funding of science. Twenty one per cent of the respondents preferred the free market.

The study, "Worldviews and Opinions of Scientists in India", which was released at the United Nations in New York last month, has been conducted by the Institute of the Study of Secularism in Society and Culture (isssc) of Trinity College in Connecticut, us, and assisted by the Centre for Inquiry India. It sampled 1,100 participants from 130 universities and research institutes in the country between July 2007 and January 2008. The intent was to conduct a series of surveys in various countries with differing cultures, in order to learn who today's scientists were and what they thought about contemporary moral and ethical issues.

On the question of ethics, 64 per cent said no to biological weapons while 54 per cent said they would not work to develop nuclear weapons. Twenty-four per cent respondents rejected human cloning as a professional choice because they did not want to play God.

On the question of God, however, Indian scientists are sharply divided. In 2005, space scientists went to Tirupati to seek the blessing of Lord Venkateswara before launching a rocket and satellite. Forty-one per cent said they would have done the same. No way, said 46 per cent of the scientific community with 33 per cent "strongly disapproving" mixing religion and science.