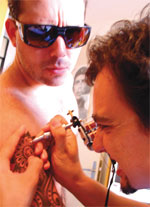 Tattooing is evil and creates “aggression and hostility in the mind of a human being,” a voiceover says. This scene is part of a programme broadcast on Uzbek state television’s First Channel on February 20. Besides the “moral damage” tattoos do, a doctor included in the programme also tells viewers that tattoos have the potential to cause skin diseases and contribute to the spread of AIDS.

AIDS is fast becoming an epidemic in Uzbekistan. But a Uzbek doctor who did not want to be named, said, “Sweeping statements, such as those made in the programme, do not improve matters”. This is not the first time Uzbek television has broadcast a programme bordering on the absurd.