THERE is some good news for dolphin lovers. The population of the endangered Irrawaddy Dolphins in Orissa's lake Chilika has increased from 138 to 146 in one year. The latest dolphin census report, released on February 18, showed a rise in the number of dolphin calves--there were 17 this year as against six counted last year. This is seen as a good sign as dolphins are slow breeders and reproduce only once in two years.

The bad news is dolphin casualty in the lake is still very high though there is an overall decline. Six dolphins died last year. This number is high considering the small population of the marine mammals in the lake that are a major tourist attraction."The casualties should be less than 2 per cent (less than three in number in the case of Chilika)," said Sudarshan Panda, chief executive of Chilika Development Authority (cda), an autonomous body created for the conservation of the lake's ecosystem. cda in association with other agencies and non-profits carried out the dolphin census.

Mechanized boats and gillnets (fishing nets that close around the gills when fish try to withdraw from narrow net openings) pose the biggest threat to the dolphins found mainly along the outer channel of the lake where there is abundance of fish for the dolphins to feed on. "The gillnets choke the dolphins which need to surface every five to seven minutes to breathe," said Chittaranjan Mishra, additional chief executive of cda. He said propellers of mechanized boats also injure the mammals. The cda designed propeller guards to prevent injuries to the dolphins but boatmen avoid using them as they reduce the speed of the boats. 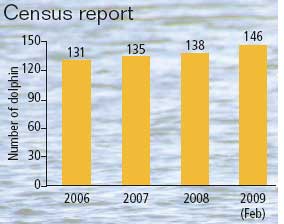 Hundreds of mechanized boats carry tourists across the lake every day. Most of these expeditions are to sight dolphins. The boatmen try to get close to the dolphins and endanger them, said cda officials. The cda along with non-profits have been trying to sensitize tourist boat operators. "But progress is slow," said Pabitra Kumar Das, secretary of Sanrakhyana, a non-profit. He said there were guidelines restricting boats to a distance of 50 metres from the dolphins. Boat operators deviate from the guidelines to earn more, Das said.

The Irrawady Dolphins are found in coastal areas, estuaries and rivers near Bay of Bengal and in South East Asia.