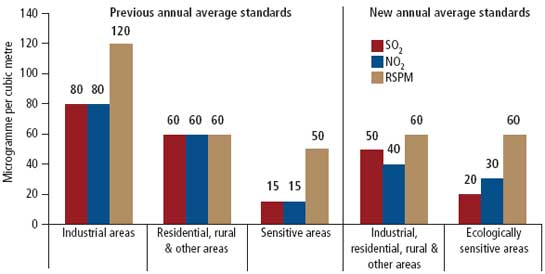 on november 18, the Union environment ministry revised the ambient air quality standards for the country after a gap of 15 years. The new standards are more stringent. They also mandate that air quality in industrial areas should be at par with residential areas.

The tighter standards make a number of industrial locations across India critically polluted. These include industrial areas in Delhi, Mumbai, Kolkata and other major cities; the cpcb monitors air quality of 341 locations in 128 cities. Many of these areas were considered only moderately or highly polluted under the previous standards. This may curb expansion of industries in critically polluted areas (check Down To Earth website for pollution status of cities).


A senior scientist with the Central Pollution Control Board (cpcb) said, Standards are now uniform and guided by health concerns. In addition to meeting emission norms, industries will also have to comply with the ambient air quality standards to improve overall air quality in a city. Industry bodies like assocham said the new norms should not be enforced. Koteshwar Dobhal, spokesperson of assocham, said status quo should be maintained.

Public health is central to the new standards that discontinue the earlier practice of different standards for different land-usesthe standards were more lax for industrial areas. For instance, the standard for particulate matter of 10-micron size (PM10) has been reduced to align it with the norm for residential areas (see graph). The standards have prescribed limits for six more pollutantsozone, PM 2.5, volatile organic compounds like benzene and benzo(a)pyrene and heavy metals, arsenic and nickel.

The new norms have changed the pollution profile of cities overnight. The standard for particulate matter (PM10) makes 176 monitored pockets across the country critically polluted as against 123 earlier. If one applies the revised NO2 standard, 17 locations, residential plus industrial, are critically polluted as against six earlier. The excess NO2 levels indicate explosive increase in private cars, especially diesel driven ones, said Anumita Roychowdhury, head of the air pollution unit of the Delhi non-profit, Centre for Science and Environment.


The environment ministry while prescribing new air quality standards has not specified how or when it will be implemented. Union minister of state for environment, Jairam Ramesh, said cpcb would prepare the implementation strategy. He did not explain how he would comply with the current 11th five-year plan target that has mandated the central government to meet monitorable air quality norms by 2011-2012.

This means city governments would have to chart their own course to meet the air quality standards irrespective of land-use variations. For this, they will have to identify the main sources of pollution. Industrial cities like Howrah and Ludhiana will have to curb industrial pollution; cities where vehicles have increased drastically will need to reduce traffic emissions. But there is no mechanism to make authorities accountable for the air quality as in the US where standards are federally enforceable and civil society can file law suits against the state, said Roychowdhury. Meeting air quality standards should be made legally binding, she added.