Unhealthy human consumption at odds with the environs and socio-equity 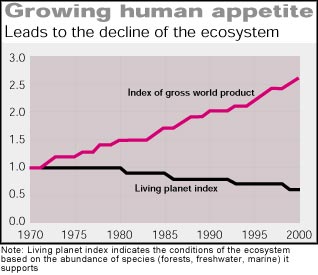 • World's household consumption expenditure was US $20 trillion in 2000, up from US $4.8 trillion in 1960. Some of the increase was because of population growth, but much of it was driven by rising incomes

• The consumption frenzy led to unsustainable use of natural resources. Between 1960 and 1995, worldwide use of minerals rose by 2.5 fold, metals by 2.1 fold and wood products by 2.3 fold

• 1.9 hectares of productive land is available for each person. But every human uses 2.3 hectares


To save the environment and ensure socio-equity, rich nations need to cut down consumption by 90 per cent

Governments can facilitate the transition. But they are not inclined to do so. Environmentally harmful subsidies amount to US $849 billion annually worldwide

• Most spending is on goods unnecessary for comfort and survival, but which make life enjoyable. In India, fast food industry is growing by 40 per cent each year, but one-quarter of Indians are under-nourished

• Consumption is highest in nations like the US. An American uses 22 kilogrammes of aluminum per year, while an Indian uses two kilogrammes and an African less than one kilogramme

• Trade pacts have helped the rich. Cars in Australia cost US $2,900 less than their price in 1950. This has increased their consumption