The much-hyped sewage treatment plants installed in Kanpur, Uttar Pradesh, under the Ganga Action Plan are proving to be ineffective. A report released in October states that the irrigation water supplied from these steps to villages located in the area is contaminated with toxic heavy metals. What's more, the pollutants have seeped into the region's groundwater 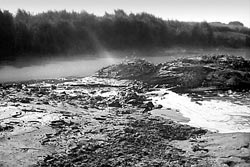 The much-hyped sewage treatment plants (stps) installed in Kanpur, Uttar Pradesh, under the Ganga Action Plan (gap) are proving to be ineffective. A report released in October states that the irrigation water supplied from these stps to villages located in the area is contaminated with toxic heavy metals. What's more, the pollutants have seeped into the region's groundwater.

The study was conducted by Rakesh K Jaiswal, executive secretary of Kanpur-based non-governmental organisation Eco Friends, and Padma Vankar of the Indian Institute of Technology (iit) Kanpur. The findings were disclosed during a public hearing that was held for villagers affected by tannery pollution. The gathering also comprised officials of the Central Pollution Control Board (cpcb), Kanpur Nagar Nigam, Uttar Pradesh Jal Nigam, the state health department and some public representatives.

A significant inference that can be drawn from the report is that the so-called treated water being fed into the Ganga is increasing the river's pollution level rather than curbing it. Jaiswal points out that the Kanpur stretch of the waterbody resembles a natural sewer, garbage dump and morgue all rolled into one. The results of the research indicate that gap is a flop show, says Vankar.

gap was launched by the Union Government under the seventh five-year plan in 1985 (see: 'A ritual offer of nothing', Down To Earth, August 15, 2003). It envisaged reduction of pollution levels in 27 class-i cities along the banks of the Ganga, which together accounted for two-thirds of the urban pollution load. Kanpur, too, figured in the list of places selected for implementing the programme.

The town generates about 360 million litres per day (mld) of sewage and industrial effluents. Ever since gap got underway, wastewater is diverted to treatment plants through intermediate pumping stations before being discharged into the river. It may be noted that stps, set up as a part of the first phase of gap, could treat only 160 mld of wastewater.

In downstream villages such as Wajidpur and Sheikhpur, which are in the vicinity of leather tanneries sited in the Jajmau area, treated water from stps is used for irrigation purposes. Of late, the local people of the villages -- numbering about 20,000 -- had begun to suffer from several health problems. These included skin ailments like rashes, boils, papules, vesicles and eczema.

Jaiswal and Vankar had initiated their study to get to the bottom of the matter. The research involved testing the quality of water being released by stps as well as that of groundwater. Among the heavy metals detected were nickel, cadmium, mercury, arsenic and chromium vi. The levels of these toxic elements were beyond permissible limits (see table: Brimming over).


Ironically, agencies like cpcb project gap as a successful venture. But the board's own figures contradict its claims. According to B P Shukla, zonal officer, cpcb, the biochemical oxygen demand (bod) in the river has gone down from 8.6 in 1986 to 6.4 in 1998. This, he says, confirms that the quality of Ganga river's water has improved. However, if this were true, there should have been a corresponding increase in the level of dissolved oxygen (do). On the contrary, the do level has plunged from 6.7 to 5.2 during the same period. It is strange that cpcb is flaunting this data, because the do bit clearly shows that the water quality has deteriorated, says Jaiswal.