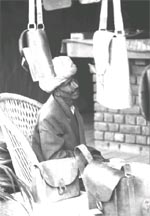 the furore triggered by the international animal rights group People for the Ethical Treatment of Animals ( peta ) over Indian leather has taken a serious turn with concerned authorities in India questioning the organisation's motives.

Meanwhile, peta has persuaded five more firms to ban goods and accessories made of India leather. The latest to join the protest is the us clothing companies Liz ClaiborneInc and J Crew Group Inc, British shoemaker C&J Clark Limited and men's footwear manufacturers Fiorucci and Florsheim.

Urging peta not to misinform the world about the origins of Indian leather, director of the Centre for Technology Development ( ctd ) D Raghunandan said that for the past two decades his group was involved in revitalising the leather tanning business by rural artisans and that the leather used was taken from animals who had died a natural death.

A statement by the ctd pointed out: "They ( peta) have been motivated not just by their passions compounded by monumental ignorance but by other considerations, such as the interests of some western industries and multi-national companies to throttle a major Indian export."

The Indian Council for Leather Exports had also earlier passed a clarification stating that animals were primarily slaughtered for meat, a claim that has been swiftly refuted by peta .