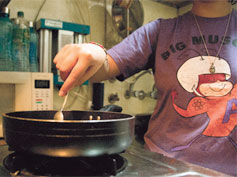 IN 2004, residents of West Virginia, US, accused a chemical manufacturing company of contaminating drinking water supply in the region with a fluorinated organic compound.

Perfluorocarbons (PFCs) are man-made chemicals used to produce teflon, found in countless household products like non-stick cookware, pizza and popcorn boxes. The accumulation of PFC derivatives—perfluorooctanoate (PFOA) and perfluorooctane sulfonate— in the blood has been associated with disrupting hormonal balance in animals.

High levels of PFCS have also been found to increase the risk of thyroid cancer, heart disease, and weaken the immune system.

Following a complaint by the residents, the county court of West Virginia set up an independent body to study the effects of PFC exposure on the health of residents in the region. The study estimated the amount of PFOA and other markers in the blood including estradiol, a sex hormone in women.

Data was collected on more than 69,000 people from six districts in the region between August 2005 and August 2006. It is the largest existing study of a population exposed to PFCs in drinking water. A team led by Sarah S Knox from the West Virginia University School of Medicine used the data on blood tests of 25,957 women between the age group of 18 and 65. It was found that women in their perimenopausal (when menstrual cycles start becoming irregular) and menopausal periods (when menstrual cycles stop) experienced early menopause if they had higher levels of PFC derivatives. The team also found lower levels of hormone estradiol in women with higher levels of PFOA. They concluded that as the levels of estradiol decline, menopause approaches. The study will be published in the June 2011 issue of Journal of Clinical Endocrinology & Metabolism.

“A caveat lies in the fact that subjects considered are only from an industrial contamination site, with levels far above than those seen in the general population,” says David Melzer professor of epidemiology and public health, Peninsula Medical School, Exeter, UK.

Kiran Rangari, research officer from the Department of Reproductive Biomedicine, National Institute of Health and Family Welfare in Delhi says the finding is important as till now studies have only focused on the effect of chemicals on male reproduction like decreasing sperms and semen volume. “It helps understand how household products like cookware can cause health hazards in women,” she adds.