Proposed change in land law may cause inter village disputes 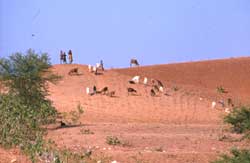 madhya Pradesh (mp) government has proposed an amendment in land distribution laws, which will override the authority of gram sabha over common property land. This decision comes at a time, when panchayat institutions are clamouring for more power from the Union government.

The amendment calls for the redistribution of nistar land (common grazing land) among landless Scheduled Caste (sc) farmers. Accordingly, each family member of the farmers would be considered as independent beneficiaries of land. The prevalent law regards the entire family as one unit and allocates land to them as one.

But, many believe that the proposed amendment will create more problems for villagers. "The plan would make a dent on the already limited grazing land for poor villagers and will eventually affect the livestock", says Ashish Mondal of Action for Social Advance-ment (asa), a Dahod based non-governmental organisation working on land issues in Madhya Pradesh. With decrease in grazing land there is also the risk of 'shifting of livestock load' on nearby forests.

Another clause for concern: if there are no sc s in a village, the grazing land would be given to those of other villages which can result in conflict between villagers. And with no gram sabha mandate to interfere, the problem can only aggravate. The amendment also poses the risk of bypassing its own gram swaraj adhiniyam , which mp enacted ten years ago to delineate power to gram sabhas under the panchayati raj .

But, the government seems confident of the proposal. "With the new amendment, besides land for the landless, we will be able to come down on large scale encroachments on these common lands," explains R Gopala-krishnan, secretary to the chief minister.

Vir Singh Raghuvanshi, revenue minister of state too feels that the amendment will ensure that the landless acquire at least one hectare of land.