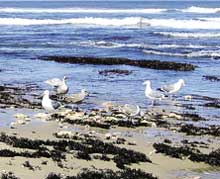 The number of oxygen-starved dead zones in the world's oceans has jumped by more than a third in just two years, notes a United Nations Environment Programme (unep) report. The report was recently released at an international marine pollution conference in Beijing, China.

The new findings estimate that there are at least 200 dead zones worldwide, compared to 149 in 2004. Increasing load of fertilisers, sewage, fossil fuel burning and other pollutants in the marine water has led to a doubling in the number of oxygen-deficient coastal areas every decade since the 1960s. The affected waters are robbed off fish, oysters, sea grasses, and other marine life, damaging food supplies for millions of people worldwide, the report warns. According to the unep report, the situation may well worsen: the volume of nitrogen alone dumped by rivers into the oceans will climb by 14 per cent by 2030, compared to the mid-1990s.