More than 12 GW of solar PV projects in the pipeline in West Asia, Africa

Reason for the surge is varied. It ranges from improving lives of the energy poor, to reducing dependency on fossil fuels

Solar PV projects totalling 12 giga-watts (GW) are in different stages of planning in West Asia and Africa, according to a report of NPD Solarbuzz, a market research and consulting services company that tracks all solar power-related activity in the region. The report was assimilation of information from the database of the company’s Middle East and Africa Deal Tracker - Solar Project Database.

The tracker covers 29 African countries and seven West Asian countries. The 12 GW comprise 11 GW of African PV projects and the 1.3 GW of installed capacity in West Asia. “Until now, PV market growth in the MEA [Middle East and Africa] region has been mainly driven by a small number of economically prosperous countries, in particular South Africa and Israel,” said Susanne von Aichberger, analyst at NPD Solarbuzz. Now every country in Africa and West Asia is investing in solar PV.

Projects have been announced in many countries, including those in Algeria, Cameroon, Egypt, Ethiopia, Ghana, Kenya, Morocco, Nigeria, Senegal, South Africa, Swaziland, Tunisia, Uganda, Zambia, and Zimbabwe. Most of already commissioned projects in the African continent were in South Africa, which amounted to 700 MW in total. Outside of South Africa, completed projects were located in Benin, Cap Verde, Mauritania, Senegal, and Uganda.

In West Asia, Israel has the 260 MW of solar PV installed capacity and another 300 MW is in pipeline. However, Saudi Arabia will soon lead the bandwagon since the tenders for the renewable energy programme are to be announced soon. Israel wants to reduce its dependency on fossil fuel for energy, however, bureaucracy and political instability are perceived as major impediments. Jordan is also listed in the report as a country with growth potential; about 600 MW of capacity is expected to be installed.

Ninety-nine per cent of all the projects are utility scale or large scale power projects that export power to the grid projects and all are ground-mounted. “Economy of scale tends to raise the attractiveness of large projects, but the large size of ground-mount solar parks also increases risk, particularly in countries with previously little or no existing PV markets,” says von Aichberger. 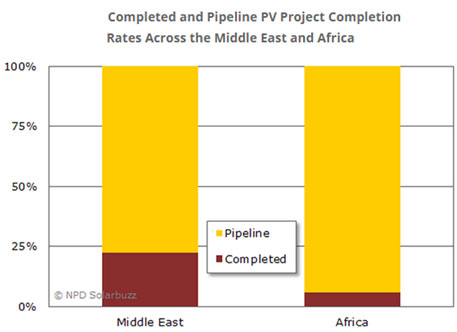 The reason for this surge in developing solar for the respective countries is varied. Sub-Saharan Africa wants to provide power to the millions of energy poor. “Demand is also being driven by project developers who are seeking new overseas markets to compensate for the downturn in PV projects across mainland Europe,” von Aichberger noted.

All the numbers seem very positive for the solar industry, but it would be premature to celebrate. Project realization rate in West Asia has been higher as compared to the African PV market, but only time will tell how many projects are actually installed and commissioned on the ground.