Certain smells can lure mosquitoes away from humans 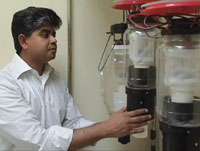 MOSQUITOES rely on chemical cues such as smell of human breath, sweat and skin to get to a potential prey. This olfactory pathway has spawned several research papers. The latest comes from scientists led by Anandasankar Ray from the University of California, USA. They have discovered chemicals which can prevent mosquitoes from seeking a blood-meal. Mated female mosquitoes seek human blood before laying eggs. This blood meal is essential for the development of mosquito offsprings.

Based on their own previous research on fruit flies, the team had established that CO2 —the main component of exhaled air—is an important odorant cue for insects. As it reaches them, it causes them to surge towards the source. Ray and colleagues screened chemicals which could intercept the CO2 - recognition pathway and stumbled upon two types: those that mimicked CO2 and those that befuddled the senses.

2-butanone turned out to be successful mimic, luring mosquitoes away, ensuring its future as an insect trap. The most interesting find was 2,3 butanedione. One whiff left the mosquitoes stunned. “The odours bind to the CO2 -receptor so strongly that it remains in the on state. Imagine a shehnai stuck on a note of high volume. It is so overpowering that one cannot hear any other instrument,” explains Ray.

To test the impact of chemicals the team blended four potential chemicals including 2,3 butanedione and set up wind tunnels on the other end of which was a CO2 -emitting ring. They made Anopheles aegypti females smell it. Those treated with a control blend— without odorants—successfully navigated their way towards the ring. The others could not even fly upwards; let alone look for a CO2 -emitting source.

Next, trials were set up in Kenya in two huts: one treated and the other untreated but both containing CO2 emitting traps. Species of Culex mosquito that transmit Japanese encephalitis were tested. The number of females trapped by the treated hut was significantly lower than those entering the untreated hut.

The study published in the June 2 issue of Nature has its advantages. A blend of compounds can make it much more difficult for the mosquitoes to develop resistance.

When it was pointed that Anopheles gambiae, the malaria vector, was not used in the trials, Ray says, “These experiments are ongoing and being pursued in more detail.” Summing it up, University of California entomologist Zainulabeuddin Syed says, “I have been involved with olfaction and CO2 for years. The study adds new momentum.” In 2008, Syed and colleagues found that N, N diethyl benzylamide or DEET— the most successful repellant till date—does not jam the mosquito’s senses, a misconception previously harboured by the scientific community (PNAS, September 9). The suckers actually smell and get repulsed by DEET. Ironically, DEET is rarely used in the tropics because it is expensive.