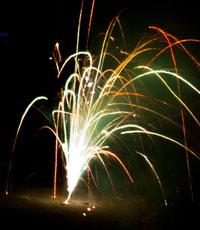 Manufacturers of firecrackers are flouting Supreme Court directives on noise levels and the quantity of heavy metals to be used in them, states a recent report by the Maharashtra Pollution Control Board (MPCB) and non-profit Awaaz Foundation. The Supreme Court in 2005 had ordered that only firecrackers that produce sound less than 125 decibels (dB) can be manufactured.

MPCB released the report in October this year after conducting a series of tests across the state to assess the compliance of noise level standards, prescribed under Environment (Protection) Rules, 1986.

MPCB had carried out these tests between October 7 and October 14 this year—in Mumbai, Pune, Nagpur, Nashik, Aurangabad and Kolhapur—in association with the Police department, NGOs and Petroleum and Explosives Safety organization, Nagpur, in the presence of local media to create awareness among people and children.

Noise standards for firecrackers have been notified under the Environmental (Protection) Act. As per this notification, the manufacturing, sale or use of firecrackers generating noise levels exceeding 125dB (AI) or 145 dB (C) at distance of 4m from the point of bursting are prohibited. For firecrackers in series, these noise limits are made more stringent depending upon the number of crackers bound together.

Many brands failed the test

Altogether, 89 brands were put to test by MPCB, out of which 30 were found to be violating some or the other standard set for them.

After these tests, the MPCB has decided to monitor noise levels at 15 locations in Pune for three days around Diwali. Noise levels will be monitored at Shivajinagar, Pune-Satara Road, Karve Road, Swargate, Yerawada, Khadki, Mandai, Laxmi Road, Sarasbaug, Parvati, Hadapsar, Koregaon Park among others.

Anil Mohekar, regional officer, MPCB said that despite several awareness drives, the people continue to burst such firecrackers because they are easily available in the markets. Many of them are manufactured outside the state. He added that the crackers that are manufactured in Maharashtra are within the guidelines of the Petroleum and Explosive Safety Organisation (PESO). The firecrackers that flout the norms are not manufactured in the state, but have a steady supply in various markets.