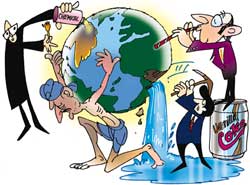 Caterpillar, Chevron, Coca-Cola, Dow Chemical, Dyncorp, Ford Motor, kbr , Lockheed Martin, Monsanto, Nestle, Altria Group, Pfizer, slde and Wal-Mart make the cut. However, they would wish they hadn't because they are on the 14 'most wanted' list of corporate human rights abusers, 2005, according to Global Exchange, an international human rights organisation.

Chevron has been held responsible for environmental destruction, health violations and violent killings while Dow Chemical has been accused of creating chemical weapons, marketing poisonous chemicals, illegally dumping toxins into populated areas and much more.