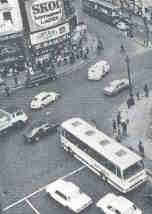 A GROUP of American and British scientists claims to have developed an instrutment to measure the levels of fine air-borne particles from vehicle exhausts, which cause respiratory disorders in thousands of people each year.

The vibrating tube impactor (VTI), developed by scientists led by David Booker Of AEA Technology, along with an Anglo-American instrument company Graseby Anderson, can measure the concentration of these particles - each smaller than 10 micrometres across - upto 4 size ranges simultaneously (New Scientist, Vol 146, No 1975).

Other instruments, says Booker, can only measure the total mass of the particles, rather than splitting them into size fractions. Determining the amount of each fraction is important because different sized particles penetrate people's lungs at different levels and, therefore, cause characteristic health problems.

The VTI consists of 4 glass u-shaped tubes connected in series. Each successive tube has a smaller bore so that dustladen air accelerates as it passes from one tube to another. The tubes can also be set up to have successively sharper bends.

When the air enters the first tube, larger and heavier particles fail to negotiate the bend and stick to the tube wall. Progressively smaller particles are deposited in the successive u-tubes. Each tube gets heavier as it collects the particles. To measure this increase in weight, each tube is vibrated at fixed frequency. The heavier each tube becomes, the greater energy is required to maintain the vibration.

AEA Technology has tested the VTI alongside the best particle monitor previously available - called the tapered element oscillating microbalance (REOM). Because TEOM captures particles in a filter, it can measure only I size range of particles at a time. Besides, "the VTI'S u-tubes are more robust and cheaper to produce than TOEM'S tapered elements," say researchers.