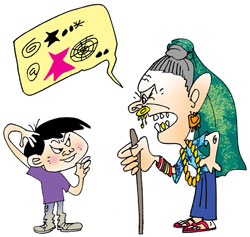 Plans are being made to extend medical help to an octogenarian Nepalese woman who is the last known speaker of Dura. None of the rest in Soma Devi's family speaks this language, which belongs to the Tibeto-Burmese family. She has to use other languages to communicate with them.

The only other person who could speak the language died last August. Now Soma Devi Dura's health is ailing at her home in the hills of western Nepal. She has severely impaired sight and hearing.

But the 82-year-old is a rich source of songs and folklore in the Dura tongue. Languages decline when parents fail to pass them down or children lose interest in them, linguists say. But some scholars are striving to preserve Dura. Kedar Nagilam a Nepali linguist who as a child played with Dura children, has compiled 1,500 words and 250 sentences in the language. He wants to take Soma Devi to Kathmandu for medical treatment, and to interest Dura children in taking lessons in the language.

Research can throw up surprises. The language Kusunda was presumed dead till campaigners for indigenous rights went to western Nepal and found a mother and daughter speaking it, and a woman who in a different district knew the language but had not spoken it since 1940. The latter, now 77, got a chance to interact with the other two Kusunda speakers last year. Linguist Madhav Prasad Pokharel said she was "amazingly fluent".

Nepal has more than 100 tongues, several with fewer than 100 speakers. Pokharel admits that reviving these languages is difficult, but argues fervently that they can and should be preserved.