How did the Universe "get going"? Here's a new, interesting theory 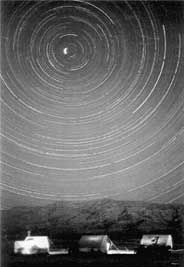 that necessity is invention's mother is a well-known theory in science. Now, two American physicists have taken this theory a little further, applying it to the Universe itself. They say that the Universe might have been its own "mother". According to them, this possible explanation may give us a more satisfying answer to the eternal mystery of the Universe's genesis than any other alternative dreamt up so far.

Physicists often tend to get queasy trying to work out how the Universe got going in the first place. Some scientists think that asking a question like what happened before the beginning of time, space and matter is like trying to find what the south of South Pole is. Others argue that the Universe has existed forever, or somehow simply popped into existence one day, apparently out of nothing.

"We suggest that the Universe emerged from something rather than nothing - and that something was itself," says Richard Gott III of Princeton University in New Jersey, usa. Confused? Not these physicists. This fascinating suggestion is a spin-off from the theory of inflation which purports to describe what went on immediately before the now-mythical big bang (New Scientist , Vol 157, No 2118).

In inflation, an unusual state of the vacuum grows rapidly and exponen-tially. One version is "chaotic inflation", a theory suggested by Andrei Linde of Stanford University, California, usa , in which the inflating regions spawn others of their kind. "These are baby universes which bud off from Universe like the branches of a tree," Gott says.

Gott and colleague Li-Xin Li say that it is possible that a branch of spacetime could loop backwards to rejoin the tree trunk. "Such a thing is possible because Einstein's general theory of relativity permits closed time-like curves - loops of time," says Gott.

One consequence of the idea is a natural explanation for the so-called arrow of time. Theories of general relativity and electromagnetism do not rule out the idea that waves can affect events that occurred in the past. For instance, they do not forbid light from travelling back in time.

Yet in our Universe, light always travels with us to the future. The reason for this, according to Gott and Li, has to do with what would happen to waves that regressed in time in the kind of universe they envisage. "They would travel back to the epoch of the time loop and circle forever, constantly reinforcing each other," according to Gott. However, such a universe could not exist, says Gott, noting that the time loop would become unstable very quickly.

"This whole area of cosmology is extremely speculative," comments Astronomer Royal Martin Rees at the University of Cambridge. "But I think this is a fascinating contribution." Gott and Li say that they have only begun to explore their ideas and much, much work still remains to be done.