Motion pictures from zeroes and ones

After compact discs, it is the turn of videos to adapt to the digital- the format of tomorrow. 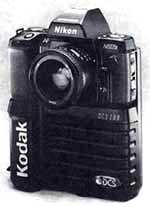 AUDIO compact discs (CDs) were only half the story. Electronic entertainment manufacturers are now getting ready to flood the market with high-resolution video CDs that can be played on an audio CD player by simply attaching an adaptor. They are also planning to launch video recorders that can record digital videos.

Normal photography and motion picture techniques use the traditional analogue technology -- where an image is seen as a continuum, much like the movements of the hands of a watch. But digital technology is discontinuous, like the numbers that flash on a digital watch. However, the advantage of digital technology is that information can be stored and transferred more reliably than analogue technology. There are various ways of storing and transferring digital signals. And, behind the impending video CD flood is an unprecedented agreement among all sections of the global electronics industry, on a common digital standard for coding images (New Scientist, Vol 139, No 1888).

Digital information is recorded as a sequence of ones and zeroes, known as bits. Converting an image into digits requires millions of bits of information. To reduce the quantum of information that has to be recorded, a system was developed by the Joint Photographic Experts Committee, which was set up to establish a common standard for converting still pictures into a digital code. The technique divides the image into square blocks and only those blocks that are dissimilar to adjacent ones are encoded.

However, digitising video images, which convey both audio and visual signals, generates even more data -- the 25 to 30 images a second needed to convey realistic motion alone generate tens of millions of bits of digital codes a second. The first step to make the vast quantities of digital information easy to handle was taken in early 1987, when researchers at the RCA Research Center in Princeton, New Jersey, "compressed" the information to less than 1.5 megabits a second to generate a video sequence. Though RCA's results were crude and took several minutes for the computer to process each second's worth of motion, it galvanised the electronics industry into looking for better ways of encoding what came to be known as full motion video.

Following the line of the RCA research, Michael Barnsley, a British scientist working in USA for the Defense Advanced Research Project Agency, invented a technique known as fractal compression to squeeze information needed to represent an image. While compression reduces the digital information required to store an image to one-tenth, fractal compression cuts it to one-hundredth.


As a result of these advances, the industry saw the commercial potential of putting more than an hour of moving video onto a single side of a 12-centimetre CD. And, in a remarkable display of industry-wide common-sense, they set up the Moving Picture Experts Group to set appropriate standards, ensure compatibility of hardware needed to encode and decode digital videos and the video CDs.

Now, with standards and formats decided, home entertainment may never be the same. Microchip manufacturer C-Cube in California is making chips that will encode feature films on video CD. Once the material is encoded at the rate of $100 a minute of screen time, discs can be pressed in bulk for less than $1 each, compared to the $3 each that film companies pay today to duplicate video cassettes. C-Cube and Motorola in Illinois have also finalised work on chips that can decode moving pictures and sound from a CD. Later this year, Philips plans to sell an adaptor that enables its audio CD players to play video CDs.