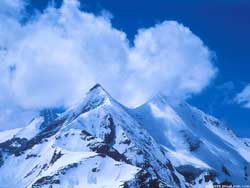 people have long fled to the mountains in search of fresh air and tranquility. But a recent 'health check-up' of the world's mountains by the un has found that many ranges themselves are in dire need of relief from modern activities that are causing lasting environmental damage. The Alps and the Himalaya-Karakorum-Hindu Kush are among the 10 ranges worldwide suffering the most due to severe ecosystem degradation, according to the un report. Other threatened mountain ranges include the Snowy Mountains in Australia and the Amber Mountains in Madagascar ( www. nationalgeographic.com, February 1, 2002).

According to the report, the Alps have degraded due to growing tourism and migration of people from lower levels. The Himalayas are threatened as a result of war, deforestation, drought, logging and overgrazing. The Rockies and Coast ranges of western North America face destruction from increasing pressure of recreational activities. Air pollution is endangering the Great Smokey Mountains in the eastern us and 80 per cent of Amber Mountains' forests have been lost due to farming, mining and charcoal production. The report notes that in developing regions, mountain erosion is intertwined with problems such as poverty, drought, famine, deforestation and, in particular, wars. Besides displacing millions of people, war and ethnic conflicts often strip land of its resources and productivity. According to the Food and Agriculture Organisation, nearly all the world's major conflicts today -- 23 of the 27 wars -- are being fought in mountainous regions.

"Major consequences of the destruction of mountains are likely to include water shortages and increased disasters such as landslides, avalanches, and catastrophic flooding," warns Jack Ives, a professor at the Ottawa-based Carleton University and the writer of the report. Ives opines that it is difficult to design a global policy to protect mountains because each region has its own strengths and problems. "There is a serious problem of widespread over-simplification of mountain-related issues and a tendency to try to solve problems that are not properly defined," said Hans van Ginkel, a professor at the un University. According to Ives, any efforts to tackle the problem must be linked to human sciences such as anthropology and human geography.