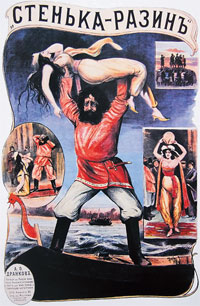 During the early 20th century the Soviet authorities had destroyed silent films produced during imperial rule, calling them bourgeois art. But around 350 of the 2,700 films created during the pre-Soviet era had survived, and are about to return home. News agency RFE/RL reports that the films will soon be acquired by St Petersburg-based Lenfilm studio from the film library of University of Florida in the US. Russian film buffs hope the collection will have some rare cinematic gems.

“Over 300 pre-revolution films is like discovering an entire continent,” Naum Kleiman, a film historian and director of Moscow’s Cinema Museum, told RFE/RL. The collection belonged to Samuel Kipnis, a passionate film collector who fled Russia during the civil war and settled in the US. There he occasionally screened the movies to audiences of Russian emigrants. After his death in 1982, the films were transferred to the university.