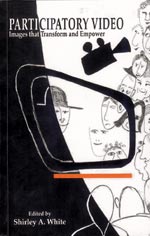 From the agitational propaganda films of the Russian revolution to the incendiary videos of Osama Bin Laden, image making has played a significant role in combating the multiple injustices of our unequal world. "Participatory video" comes in the wake of this complex tradition, where it has been a tantalising concept since the 1970s, or almost as soon as portable video made its first appearance.

It may not be a coincidence that "par-vid" also accompanied the arrival of the ngo as a purveyor of social change, in an 'end of ideology' moment, where it seems appropriate that only the digital "revolution" be granted the responsibility of empowerment and redressal.

Shirley White is a practitioner, teacher and researcher, and an American veteran of "par-vid". Her book sets out the theoretical basis of the concept, with its emphasis on the process of image making, rather than on the end product (the video/film). It is premised on the reasonable belief that the "sender" and the "receiver" are both affected by the process of communication, and the more arguable assumption that, the consequences of this exchange can be used to transform and empower.

The book also provides a handy collation of familiar global experiences, written by a range of video practitioners and researchers. Occupying pride of place are -- the Fogo project, the Canadian National Film Boards' long-running experiment in the remote islands of Newfoundland and the Indian experience in Kheda and with Video Sewa, both in Gujarat. Placed side by side, certain patterns emerge. The impact on women, from the Deccan Development Society in India to the Centro de Mujeres Comunicadoras Mayas, Guatemala, is confirmation of the liberating impact that such participation can bring, at least initially. (White is quick to point out that sometimes even marriage videos can have that impact!).

Broadly, "par-vid" seems to work best with people who have no access to the mass media. Where there is exposure, it seems to improve media awareness, by instilling an understanding of the manipulative nature of the mass media. (Threatened by a dam on the Amazon, the Kayapo tribesmen in Brazil arrive in the city to meet the government and the World Bank. The video camera in the hands of a tribesman, in full ceremonial feathers, renders their presence at one more newsworthy and powerful).

There are other engaging stories from across the world, with possible pedagogical possibilities, but the long-term goals remain somewhat uncertain. Outside the hothouse of research and prototype development, where do we want the video intervention to take us? The crux seems to be one of self-definition, the journey between what one contributor calls "facilitator" and "advocate". If transformation and empowerment are indeed the goals, then surely, video must move beyond the tepid labels of "claim maker and advocate" to address more directly what is (and remains) a political issue. Otherwise, and without irony, we are left with some modest axioms from the First World -- take only memories, leave only Land Rover tracks".

Sanjay Kak is a New Delhi based documentary film-maker