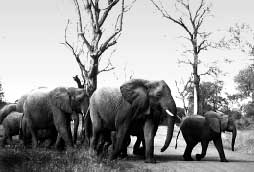 The world's biggest elephant relocation programme recently began with 40 animals transferred from South Africa's Kruger National Park to an area in Mozambique known as Coutada 16. The area is slated to be part of a 35,000 sq km trans-frontier park opening over the next year or so. During the relocation programme, in about three years more than 1,000 elephants will be moved to Mozambique, whose most of the elephants were decimated during a brutal civil war that ended in 1992.