Mozambique: a model for flood management 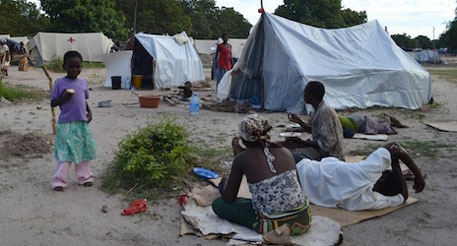 As floods continue to cause unprecedented damage in Kashmir, a conference on disaster recovery programmes is being held in Washington, the US. The World Reconstruction Conference (WRC), on from September 10-12, will discuss how vulnerable countries can better prepare and protect development gains by establishing recovery strategies and processes before disaster strikes. It is the second such conference organised jointly by the World Bank-managed Global Facility for Disaster Reduction and Recovery, the United Nations Development Programme, and the European Union. The first WRC was held in Geneva in 2011.

Based on discussions in 2011, WRC 2 released guides for both disaster recovery framework (DRF) and post disaster needs assessment (PDNA). One case study is about flood management in Mozambique.

The rainy season of 2013 in Mozambique was similar to 2000 in terms of the height to which the flood waters rose, but with much lower impact on the population. In 2000, number of fatalities was 700. It reduced to 117 in 2013 during flooding of similar scale. The flood in 2000 cost Mozambique 14.4 per cent of its GDP, while in 2013 the cost was reduced to 3.4 per cent. The WRC guide notes: "This reflects lessons learned in the prior decade, including flood forecasting, early warning systems and trans-boundary cooperation."

To draw another comparison, the guide notes that in 2007, Mozambique’s national institute for disaster management (INGC) had two days of advance warning to evacuate around 150,000 people, and disbursed an estimated US $5 million for this effort. In 2008, they had five days of warning to evacuate the same number of people, and US $3 million was disbursed. The situation further improved in 2011, with 10 days of warning before an event similar in scale to 2007/2008; INGC disbursed less than US $1 million.

The guide notes that the improvements show that "coordination is palpable and visible in Mozambique during an emergency." However, it notes that such efforts are not visible in the recovery and reconstruction phase.

Globally, natural disasters have caused damages worth nearly $4 trillion over the past 30 years —and the frequency and intensity of these powerful storms, droughts and earthquakes continue to rise. The World Bank has estimated the relative impact of various shocks on poverty. Floods and cyclones were estimated to have the strongest impact at the household level, reducing expenditures by about 32 per cent and contributing more than 2 percentage points to the poverty rate.