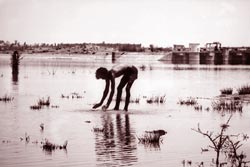 on the night of March 4, 35-year-old Chandramma of Anchetti village in Tamil Nadu's (tn) Krishnagiri district died after a severe bout of vomiting. The next day, five more people with similar symptoms expired in Anchetti and Takkati, a neighbouring village. By March 8, the toll had risen to eight. According to T Ramesh, assistant civil surgeon at Anchetti's primary healthcare centre: "The villagers had acquired cholera. There is no room for doubt since their rectal swab tests were positive." An outbreak of this water-borne disease is not uncommon in India's rural areas. What, however, sets this region's case apart is that the main source of the scourge is located a fair distance away -- in Karnataka's capital Bangalore.

Takkati and its adjoining areas are supplied drinking water from Chinnar river, a tributary of Ponnaiyar river. The latter originates in Karnataka and gets heavily contaminated with sewage from Bangalore's lakes as it travels downstream towards tn. "The real problem is at the Bangalore end. They discharge huge quantities of sewage," points out M A Siddique, district collector, Dharmapuri, tn. "This led to serious health problems last year also," he adds.

In August 2003, cholera had assumed epidemic proportions in Dharmapuri and Krishnagiri districts. While there were 979 reported cases, the disease is said to have claimed 45 lives. Then, too, the Tamil Nadu Water Supply and Drainage Board (twad) held the Bangalore Water Supply and Sewerage Board (bwssb) responsible for releasing untreated sewage into Ponnaiyar river. The bwssb acknowledged the problem and promised to take remedial measures.

Now, with elections round the corner, both the state governments are hoping that the controversy dies down quickly. The tn authorities are denying that the killer disease was cholera. And Karnataka is taking refuge in the steps it is taking to mitigate the situation.
Pennar begins its journey from Chennakesava hills near Bangalore. Just before the interstate border, excess water from Bellandur and Vartur lakes in Bangalore flows into the river which is called the Dakshina Pinakini at this stretch. It becomes the Then Ponnaiyar (South Pennar in Tamil) river as it enters tn near Hosur town in Krishnagiri. The Ponnaiyar covers a distance of 400 kilometres (km) from its point of origin before joining the Bay of Bengal at Cuddalore district. En route, it branches into Chinnar, Markanda, Vaniar and Pamban rivers.

Since Ponnaiyar river is the sole water source in Krishnagiri, Tiruvennamalai and Cuddalore districts, it has been extensively dammed. As it enters tn, the water is stored in the Kelavarapalli dam reservoir near Hosur. The surplus amount reaches the Krishnagiri dam, which is situated 50 km downstream. All along the Ponnaiyar's riverbed, infiltration wells have been dug to meet drinking water requirements. They are tank-shaped structures with a sand-packed wall through which the river water flows.
One of the waterbodies responsible for a drastic rise in the Ponnaiyar's pollution levels is Bellandur lake, located in Bangalore. The lake serves as an irrigation reservoir, a drinking water source and a fishing tank. But it has also become a dumping destination for sewage and effluents.

Its condition deteriorated to such an extent that the Bellandur gram panchayat was forced to file a public interest litigation (pil) petition in the Karnataka High Court in 1999. In the pil, it contended that the bwssb must stop pumping sewage water directly into the lake. The court ordered the bwssb to network all sewerage lines and ensure that water was treated at least up to the secondary stage before being discharged into the lake. While a 163-million-litre-per-day (mld)-capacity sewage treatment plant (stp) is located right next to the lake, it does not take care of more that 60 mld of waste, laments H Jaganath, former chairperson, Bellandur gram panchayat.

This proves highly inadequate. Because, according to M N Thippeswamy, chief engineer, planning and wastewater management, bwssb, nearly 500 mld of sewage flows into the lake. Jaganath elaborates: "Since Bellandur lake is at the end of the chain, nearly 60 per cent of Bangalore's sewage goes into it. This dirty water drains into Vartur lake and flows into Ponnaiyar river."

Successive droughts in the state have compounded the problem. "When rainwater mixes with the sewage, the organic load gets diluted. But this has not happened for the past three years," explains A Kulasekaran, chief water analyst, twad. Another reason for the lake's pollution is that the sewerage pipelines laid by the bwssb in 1978 are all blocked, says Jaganath. Consequently, the sewage seeps into stormwater drains meant to transfer water from one lake to another.

Domestic sewage is not the only contaminant. "Industrial waste also flows into the lake. It is so acidic that the sewerage pipes have got corroded," reveals Jaganath. There are 181 industries around Bellandur lake, which release effluents directly into the waterbody. Fertilisers used by farmers of Karnataka as well as tn have made things worse. "Water samples show very high levels of phosphate," discloses Kulasekaran.


"The bwssb can only treat sewage coming out of the Bangalore Mahanagara Palika area. Sewage discharged by tn's towns and gram panchayats is not our responsibility," says M N Vidhyashankar, chairperson, bwssb." Also, what of the effluents released by Hosur's industries along Ponnaiyar river?" he asks. It is noteworthy that though the Ponnaiyar is the only source of water available to the residents of Hosur, they have not been using the river's water even for non-potable purposes (see table: Undrinkable!) since 1999.

Meanwhile, Sampat Kumar, deputy director of public health, Dharmapuri, looks at the entire issue from a different angle. "The contamination occurs because of the removal of sand from infiltration wells," he avers. Sand is meant to act as a purifier. However, as a result of extensive sand mining along the river, water now reaches the wells without being purified. Its bacterial content is, therefore, very high. Water for Takkati's two storage tanks comes from these infiltration wells. "Something is definitely wrong with the water. If it is stored for more than a day, algae surface in it," says Alamelu Lingappa, a local resident. Ramesh concurs and adds: "The water samples had a high faecal content."

Last year the tn government had to take issue with its counterpart in Karnataka after a pil was filed in the Madras High Court against water supply and health officials in August 2003.


Ever since the tn government threatened bwssb with legal action, sewage treatment has become a priority for the latter. Thippeswamy says: "After the Dharmapuri incident, bwssb decided to set up five stps in Bangalore's Hebbal and Koramangala-Chalagatta valleys to curb the flow of sewage into the Ponnaiyar." However, the plants were supposed to be installed by April and bwssb appears to have missed the deadline. "The stps are under construction and will be ready by August 2004," says Thippeswamy.

In the past year, the Bangalore Mahanagara Palika has spent Rs 67.5 crore to divert sewage from Lal Bagh lake and Rs 3 crore on Ulsoor lake -- the two key waterbodies connected to Bellandur lake. Five secondary treatment plants and two tertiary treatment plants were constructed in 2003.

But Anand Kumar, technical consultant to the bwssb, says: "Merely setting up stps does not ensure that sewage will flow into them. There are both technical and administrative problems." To begin with, the network is 40 years old. "Only 7 per cent of Bangalore's sewage is actually treated, while 70 per cent of it flows into stormwater drains," says Jean Phillipe Lestard of Strategy Consultancy and Environmental Study, a French firm which is advising state government agencies on strategic town planning.

Amid this phase of uncertainty, the two state governments continue to pass the buck to each other rather than adopting a coordinated approach to deal with the problem. For its part, the Central Pollution Control Board (cpcb) doesn't want to get involved in the row. D C Sharma, south zonal officer, cpcb, says: "The complaint must be handled by the bwssb and Bangalore Lake Development Authority." Both Vidhyashankar and Tamil Nadu Pollution Control Board member secretary K Shanjivi refused to comment on the issue.

The situation bodes ill for the residents of Takkati. Till the two governments get their act together, the villagers' only source of water will also be a source of disease for them.