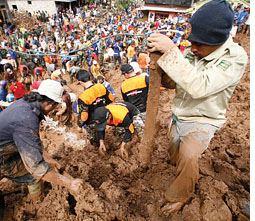 Just a few days after an Indonesian court rejected a lawsuit brought by environmental groups against an energy company alleged to have caused mud volcano in Sidoarjo district, hot and black sludge from the volcano started flowing again.

Heavy monsoon rains have exacerbated the mud flow causing dams surrounding the disaster-zone to breach on January 3. Residents in Porong in East Java province fled from homes after the mudflow covered the nearby railway tracks and roads. The mud volcano first erupted on May 29, 2006, and has since displaced over 15,000 people. Scientists blame the energy company, Lapindo Brantas, for causing the rupture by improper drilling at a gas reserve site.

Meanwhile, as heavy rains continue, landslides and floods across the Java island left about 130 people dead or mis-sing over the last week of December.