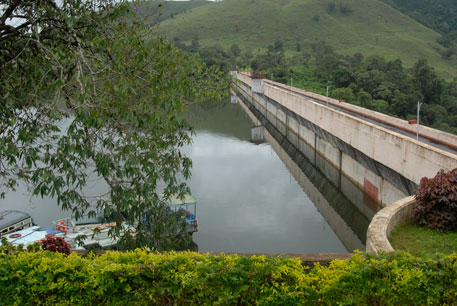 The Kerala Legislative Assembly on June 9 urged President Pranab Mukherjee to make a reference to the Supreme Court on the contentious Mullaperiyar dam issue since the 119-year-old dam posed a threat to the safety of about four million people living downstream of the dam.

The state Assembly discussed the consequences of Supreme Court's verdict which allowed Tamil Nadu to raise the water level in the dam to 142 feet (43.28 metre). Legislators across party lines pointed out that the apex court's judgement violated the Wildlife Protection Act of 1972 and the Forest Conservation Act of 1980. The Supreme Court had delivered the judgement on May 6, this year.

The Assembly unanimously adopted a motion moved by Chief Minister Oommen Chandy, which stated that increasing the water level would lead to the extinction of flora and fauna. In this context, the Centre should ensure that environment, forest, and wildlife laws are strictly adhered to, the motion said.

Members of the Assembly pointed out that raising the water level in the dam would result in submergence of a large part of the Periyar Tiger Reserve and the biodiversity of the region. Several species of birds, butterflies, and reptiles would be wiped off if the forest was submerged, as pointed out by Kodiyeri Balakrishnan,
CPI(M) leader. Additionally, a large number of the tribal population would have to be displaced, he said.

The House called for the President's reference under Article 143 of the Constitution, citing danger to life and property of about four million people  and catastrophic effects if the century-old dam failed.

Under Article 143, the President may seek the Supreme Court’s view on matters of law in public interest. Most recently, a presidential reference was sought in the 2G scam case when the Supreme Court decided to cancel licenses of 122 companies, which would have ramifications for various sectors.

The motion by the Kerala Legislative Assembly also said that the solution to the problem was construction of a new dam to ensure safety of the people and supply water to Tamil Nadu.
In 1979, Kerala and Tamil Nadu had jointly identified a site for the new dam. The motion sought the Centre's mediation to reach a consensus between the states on the new dam. "Kerala will not compromise its demand for a new dam," said Kerala Water Resources Minister P J Joseph.

New dam not a solution

Interestingly, the environmentalists in Kerala had repeatedly pointed out that construction of a new dam was not the solution to the issue.

"Till 1979, the water level in the dam was 142 feet. So if the water level is raised again to 142 feet as per the Supreme Court judgement, the forests that could be submerged will be the forests that developed after 1979," says C R Neelakandan, a noted environmentalist. "At the same time, construction of a new dam will submerge the oldest forest in the area, he said."The site identified for the new dam is within the Periyar Tiger Reserve. Political parties are making Mullaperiyar an emotional issue just for the sake of political gains, ignoring the real environmental and ecological aspects of the issues."

He also stated that civil society organisations, ecologists, dam experts, and scientists of various disciplines from Tamil Nadu and Kerala should come together to resolve the issue. If a new dam is constructed, it will have to be dismantled after a few decades again on the ground of safety issues, he pointed out.

Judgement: Judgement of the Supreme Court of India regarding water level of Mullaperiyar dam, 07/05/2014

Feature: Mullaperiyar: A plea for sanity