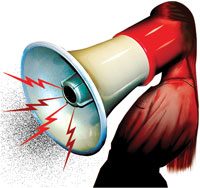 THE MAHARASHTRA government has the union environment ministry’s permission to amend its noise pollution rules.

This would dilute the scope of the existing 2,000 silence zones—an area comprising 100 metres around a hospital, school, court or a religious place where noise levels are restricted to 50 decibel during the day and 40 decibel at night. The amendment will make Mumbai more polluted and noisier, fear activists.

As per the amendment, 100 metres around only those educational institutes that have more than 100 students and hospitals that have more than 100 beds would be declared silence zones. In keeping with the union environment ministry’s Noise Pollution (Regulation and Control) Rules, 2000, the Bombay High Court ordered the state government to demarcate silence zones in February last year.

Several resident welfare associations approached the court and petitioned that their area must be listed as a silence zone. The trouble started when the court, in May this year, declared Shivaji Park, a playground in central Mumbai, a silence zone.

Shivaji Park is also the venue for most political rallies in Mumbai.