Coastal road could be built to link Worli to Haji Ali 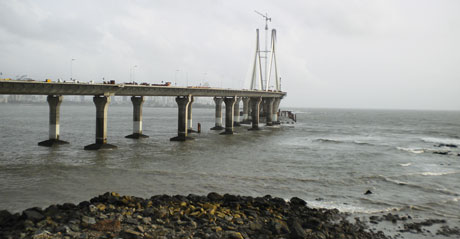 MUMBAIKARS won’t see any more sea links, at least for now. After the successful run of the five-kilometre road over the sea, linking Bandra to Worli in South Mumbai, the Maharashtra government was planning its extension to Haji Ali via another sea link. But now that plan has been shelved. Instead, a 3.7 km coastal road will be built.

The state-run Maharashtra State Road Development Corporation (MSRDC) and Reliance Infrastructure-Hyundai led consortium had signed an agreement in 2009 to complete the Worli-Haji Ali sea link by 2014. But according to sources, the consortium is most likely to back out from the Rs 2,500 crore project. Work on the project is yet to start on ground. About 30,000 fishers have been protesting the sea link, saying it will affect their livelihood.

The most likely reason for their backing out is the state government’s refusal to bail out the cash-strapped MSRDC and fund the sea link. The state has categorically refused to pay the Rs 1,392-crore viability gap fund for the project. Viability gap funding is a Central scheme wherein projects with low financial returns, executed through private-public-partnership, are given grants. “The discussions now are aimed at declaring the decision of halting the project amicably,” says a state government source. The consortium has refused to start construction before signing the state support agreement, which makes the state a guarantor in case MSRDC defaults.

According to sources, the consortium is also in trouble as Hyundai is not agreeing to incur the costs mentioned in the contract it had signed with Reliance Infrastructure. Top officials of the consortium, however, say the disagreements are part of the normal procedural discussions. “Officially, there is no report of any backing off by Hyundai,” adds a top Reliance Infrastructure official who asked not to be named.

In April this year, the then Union minister of environment and forests Jairam Ramesh had accepted MSRDC’s proposal to build a coastal road which will connect the city’s first sea link from Bandra-Worli to Nariman Point via Haji Ali. The state promotes the road as a cheaper alternative to a sea link. 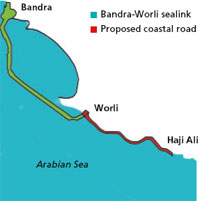 Environmental activist and advocate Girish Raut thinks both the sea link and the coastal road are bad for the city’s ecology. “They would have a cascading effect on Mumbai’s shoreline, making it more vulnerable in case of a tsunami or cyclone,” he says. The state is pushing them despite various adverse reports, Raut says. A committee constituted by the Maharashtra government in 1987 to study the possibilities of how to improve traffic in the city had recommended scrapping of proposals about coastal roads and sea links over environmental concerns.

Despite news of the sea link getting scrapped, the fishers are not happy. “A road along the coast will make it difficult for us to access the sea. Our fishing activities will be severely affected,” says Rambhau Patil, president of Maharashtra Machhimar Kriti Samiti, the action committee for fishers’ welfare. It will destroy the harbour too. Whether the road is built on stilt or on reclaimed coastal land, fishers will be at the receiving end, Patil adds. Raut concurs, adding, “Even the Intergovernmental Panel on Climate Change (IPCC) does not recommend reclamation of land along coasts as it would increase the magnitude of damage in case of a natural calamity.” The conception of the road is self-explanatory: the government is not serious about the wellbeing of fishers and marine ecology, says Thomas Kocheri, chief promoter of National Fishworkers Federation.