The financial capital of India could face damages worth Rs 35,00,000 crore by 2050 because of climate change. Between 1901 and 2007, it registered a mean temperature rise of 1.62C. The sea level around the island city is rising by 2.4 mm every year. Together they would unleash a chain of disasters flash floods, disease outbreaks, building collapses, dislocation and death

A continuous rise in temperatures would cause incessant rainfall. Over a period this would increase in frequency and intensity. The 2,129 mm average rainfall till 1989 rose 50 per cent to 3,214 mm by 2005-2006. Extreme events like flash floods would occur regularly. Insufficient drainage networks of the city would exacerbate the problem as one-fourth of Mumbais areas are low-lying.The area between Colaba and Worli where over 40 per cent of Mumbais population lives would be the most vulnerable

Flash floods and the associated weather conditions would claim 700 lives each time it occurs. Assuming flash floods occur once every five years, 5,600 people are expected to die between 2010 and 2050

High temperatures and a moisture-laden atmosphere would lead to high humidity, increasing the prevalence of vector-borne diseases. By 2050, lung diseases like asthma and various allergies, associated with rapid growth of fungi like Aspergillus and Alternaria, would be common. 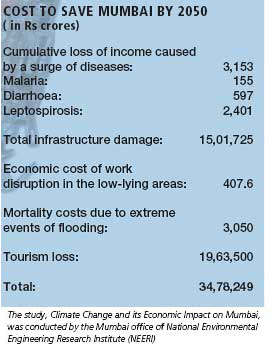 There would be a cumulative loss of income due to a surge in diseases like malaria, diarrhoea and leptospirosis

The Intergovernmental Panel on Climate Change predicted a sea level rise by 38 cm by 2050. Ingress of seawater by just 200 metres would destroy 20,000 buildings along the coast