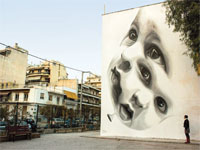 A young man climbed a 30-foot scaffold on a building in central Athens, dipped a brush into a tray of gray paint and with rapid flicks of his wristÔÇêoutlined a haunting image: a baby with two faces, looking simultaneously into an abyss and toward the sky, its vacant eyes searching for a future that was not there.

The mural, by a Greek street artist, iNO, is a huge attraction for passers-by. Its raw message of protest is the latest in a wave of socially and politically conscious artwork spreading over the walls of Athens. “People in Greece are under increasing pressure,” says iNO.ÔÇê“They feel the need to act, resist and express themselves.” In a country where the adversity of wars and military dictatorship has already shaped the national psyche, the five-year economic collapse has spawned a new burst of creative energy that has turned Athens into a contemporary mecca for street art in Europe.

Denounced as thuggish vandalism by some observers, but hailed by others as artistic and innovative, tags, bubble letters and stylised paint work have blanketed Athens trains, cars, banks, kiosks, crumbling buildings—and even some ruins of the Acropolis—as Greece’s throngs of unemployed and underemployed young people have ample time to express their malaise.