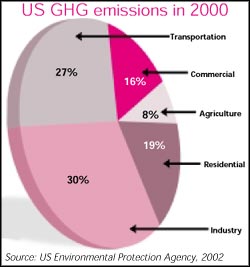 The International Center for Technology Assessment (icta), a non-profit organisation, along with other bodies, had petitioned the epa on October 20, 1999. They contended that the epa should monitor and control emission of carbon dioxide (co2), methane, nitrous oxide and hydrofluorocarbons from new motor vehicles and engines.

The plea pointed out that these emissions were contributing considerably to global climate change, and that a 1998 memorandum of the epa ('Authority to Regulate Pollutants Emitted by Electric Power Generation Sources') already accepted co2 as an air pollutant. It was suggested that vehicular emissions of ghgs could be significantly reduced by increasing the fuel economy of vehicles, bringing down tailpipe emissions, and using other current and developing technologies.

The epa, however, observed: "After careful consideration of the petitioners' arguments and public comments, we conclude that we cannot and should not regulate ghg emissions from us motor vehicles under the caa." It further noted: "Congress has not granted epa authority (within the act's ambit) to regulate co2 and other ghgs for climate change purposes." The agency also stated that setting ghg emission standards for vehicles "is not appropriate at this time".

Jeff Holmstead, assistant administrator for the office of air and radiation, asserted: "Congress must provide us with clear legal powers before we can address a fundamental issue like climate change. The caa was not designed for this purpose." This appears to be a volte-face in the light of the fact that the epa itself had testified before congress in October 1999 (during the Bill Clinton regime), declaring that it had the necessary authority to regulate co2 as a global warming pollutant.

Predictably, industry associations have welcomed the decision. "What they have done is absolutely right. In fact, it is the only thing they could do," gushed William Kovacs, vice-president, us Chamber of Commerce. Environmentalists, on the other hand, are dismayed. David Bookbinder, senior attorney with the Sierra Club, struck a critical note: "The (George) Bush administration is again ducking its legal and moral responsibility to address global warming." The gravity of the problem can be gauged from a study conducted by the Pew Center on Global Climate Change. It shows that the us transportation vehicles are responsible for nearly a third of the country's total ghg emissions (see: pie chart).

In stark contrast to the retrogressive federal actions, California continues to surge ahead with its 'clean air' agenda. On July 22, 2002, it passed a bill titled 'ab 1493' instructing the California Air Resources Board (carb) to develop and adopt regulations that achieve maximum feasible reduction of co2 emitted by passenger vehicles and light-duty trucks in the state.

At a time other key nations of the North are falling in line with the Kyoto Protocol, the us ostrichism has become more glaringly obvious. The eu, for instance, has initiated steps to curb ghg emissions from the transport sector by encouraging car manufacturers to develop fuel-efficient engines. Perhaps, the us' actions are being guided more by the politics of fuel economy than the wider issue of co2 regulation. This explains the epa's recent stand on the matter, which ensures that fuel-efficiency standards don't become stringent.