Indian farmers are busy harvesting the booming demand for mushrooms. The problem is that it is a delicacy that is rather fastidious about its growing requirements 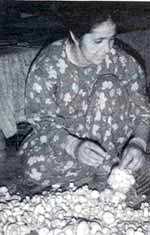 TIME was when people used to go into the forests to pick mushrooms. Now they are commonly available in vegetable shops in cities, thanks to the mushrooming of farmers across the country who are cultivating the fungus.

Says R N Verma, director of the National Centre for Mushroom Research and Training (NCMRT) in Chambaghat, Solan, "Entrepreneurs have taken up mushroom farming in a big way. The message has reached people that mushrooms have a national and international market." Says Raj Kumar Sood, a small farmer in Malyana village near Shimla, who has been in the business since 1979, "There's money in mushrooms."

But cultivating the toadstools isn't easy: they are the spoilt brats of agriculture. "Mushrooms can be very fastidious in their requirements," says Verma. "The nutrition, the temperature conditions and the humidity have to be just right for proper growth." Scientists at the NCMRT are studying the teething demands of different varieties of mushrooms and attempting to adapt them to Indian conditions. Most small mushroom growers are seasonal farmers who cultivate the fungus only in the cooler months. Year-round cultivation is only possible under carefully controlled climates in airconditioned rooms, with computers to monitor and regulate temperature, relative humidity and carbon dioxide levels, all of which spells huge investments.

Over the past 2 years, several large units with capacities of 3,000 tonnes per year have come up. Small seasonal farmers, on the other hand, generally produce 100 kg or so a day in the favourable periods. Cultivation in India has jumped from a mere 100 tonnes in 1970 to 25,000 tonnes per year today, with about 60 per cent of the produce grown in large units.

About 80 per cent of India's produce is exported. Says B L Dhar, a senior scientist at the NCMRT, "The cost of producing mushrooms in the West is rising because of high labour costs. Europeans and Americans are increasingly looking to China and India for their mushrooms."
The most widely grown mushrooms are the white button mushrooms (Agaricus bisporus), known as European or temperate mushrooms because of their low temperature requirements: 24 0 C for vegetative growth (growth of the mycelia, which resemble plant roots) and 16-18 0 C for fruiting, or formation of the edible portion, the umbrella-shaped cap.

Another variety of button mushrooms, Agaricus bitorquis, is suitable for the warmer plains, since it needs a temperature 4-6 0 C higher than A bisporus. The popular button mushroom requires high quality compost for cultivation. The compost provides the substrate on which the mycelia grow and is, in fact, the only source of nutrients for the mushrooms, which cannot produce their own food like other plants.

The preparation of the compost, which is a combination of wheat straw, chicken manure, gypsum and urea, is done in 2 phases spread over 16-20 days. The first phase consists of outdoor treatment, which starts the process of fermentation, sweetening the compost. It is then pasteurised to eliminate pathogens. All the commercial units bulk pasteurise their compost, using steam, in a specially designed chamber. The temperature of the compost is hiked up to 58 0 C and then gradually reduced to 25 0 C, killing worms that would otherwise devour the mycelia.

Once the compost has been prepared, it is seeded using spawn. The spawn is prepared by inoculating sterilised cereal grain -- wheat grain being largely used in the north and jowar in the south -- with the desired mycelium, giving it an advantage over competitive fungi. The inoculated grain, kept in bottles or sterilised polythene bags, is incubated for about 20 days till the mycelium spreads. This is then used as seeding material.

About 15-20 days after the compost has been seeded, it is impregnated with mycelial threads. This spawn run is then covered with casing soil, which is also pasteurised. Casing helps hold back moisture which is necessary to induce fruiting. In India, farmyard manure is used for this purpose along with spent compost.

A week after casing, the temperature is brought down from 24 0 C to 16 0 C. Pinheads start appearing soon after, and can be harvested when they attain the requisite size. An entire cycle takes about 90 days. The paddy straw and oyster mushrooms can be grown on substrates like paddy straw or wheat straw, maize stalks or even dried leaves. The requirements range from a temperature of 30-35 0 C and a humidity of 50 per cent for the former, and 20-30 0 C for the latter (HUMIDITY), making them ideal for the plains of our country.

The NCMRT has developed some new strains, such as the P1, which can yield between 10-15 kg of mushroom per 100 kg of compost. A high yielding strain of A bitorquis, NCB-6, has been developed which gives a 16-19 per cent yield (16-19 kg mushroom per 100 kg of compost) in 6-8 weeks of cropping. Recently, some new cultures have been shown to have yields higher by 26 to 36 per cent than the strain being used. Their requirements are now being studied so that they can be cultivated in large numbers.

However, most large commercial farmers prefer to use imported hybrid strains, because they are higher yielding. No hybrid strains have as yet been developed in India, although research on this is continuing in various laboratories around the country.


Indian research on improving production largely concentrates on the substrate used and on the casing material. The effect of adding various oil cakes on yields, especially cotton seed meal (CSM) and soyabean meal (SM), to the compost is being studied at the NCMRT. Data obtained indicates that yields are substantially increased when SM is added, irrespective of the time of addition. CSM increases the yield only when applied at the time of casing.

Says B Vijay, a senior NCMRT scientist, "Post-pasteurisation supplementation has become routine practice abroad, but is yet to be adopted in India."

Experiments done at NCMRT recently have shown that faster growth of button mushroom mycelia occurs when the surface is kept covered with paper with a layer of paddy husk on it, ensuring greater moisture retention. The present practise is to keep the seeded compost covered with a newspaper, in which case it takes 2 weeks for sufficient growth of mycelia before casing can be added.

In order to determine the predominant diseases affecting mushroom cultivation in India, NCMRT scientists conducted surveys from 1989 to 1993 of mushroom farms around the country. The common causes for reduction in yields were pathogenic fungi such as the false truffle (Dichleomyces microsporus), and competitor moulds, especially the brown plaster mould (Papulasora byssina). NCMRT researchers have found that a mixture of formalin and Bavistin, when added to the compost, controls mould fungi.

Scientists at the Y S Parmar University of Horticulture and Forestry at Solan have found that the incorporation of neem and castor leaves in the compost reduces the incidence of fungi, while the neem leaves also inhibit the nematodes, or worms. However, the addition of neem inhibits mycelial growth.

A number of institutions affiliated to the ICAR train potential mushroom cultivators. The NCMRT holds a 15-day training programme each year, training about 50 people in each capsule. According to Verma, every effort is made to ensure that the farmers are drawn from all parts of the country.

Opinions on the value of the courses differ. Says Sood, "At the end of my course, all I knew was that I should get into the business. All that I have learned is through trial and error. What can one learn in a 15-day course?" Budh Ram, who underwent training in 1983 at the Himachal Pradesh Krishi Vishwa Vidyalaya, Palampur, feels that 15 days is time enough to learn the skill. "You need compost, you need spawn. And you need to work. That's all."

Both agree that the business is lucrative. Ram, who set up his farm at Chambaghat, produces 80-90 kg of mushrooms a day, of which 75-80 kg is sold fresh. The remaining are sold canned or as pickles. According to him, "There's never a day when my produce goes waste." Says Sood, who produces about 100 kg a day from October through May, "There's no question of a loss."