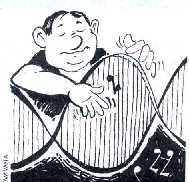 The latest rage in the West is products like music, ink and cards based on DNA's atomic structure. A French biotechnology company has developed Le Biopen, a special writing instrument that uses ink containing short strands of DNA, whose exact sequence is konwn only to the company. The pen can be used to sign paintings and official documents and the signature's authenticity can be confirmed after examining them for DNA strands, reports the International Herald Tribune.

A New York company has developed wind chimes tuned precisely to the atomic vibrations of DNA. David Deamer, a biophysicist at the University of California, and Susan Alexjander, a music theorist and composer at California State University, devised a scale based on DNA's atomic structure and composed music to the tune of its code, Another Californian biotechnologist, Kary Mullis, has founded a company to sell pieces of DNA cloned from rock stars and other cultural heroes. The company plans to produce cards with some of their DNA put into it with some sequence information printed on the reverse. Mullis explained she wants to make money and also educate the public about DNA.